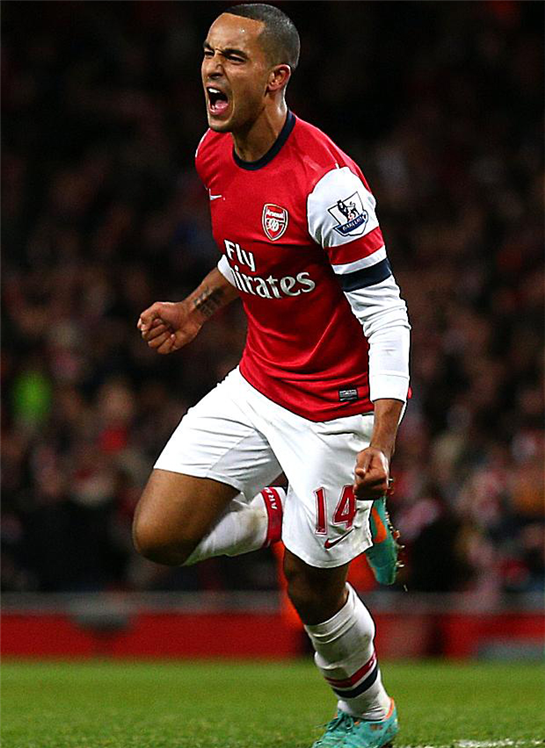 ARSENAL forward Theo Walcott has denied reports of a disagreement with manager Arsene Wenger and that an impasse has been reached over a new contract.
The 26-year-old England international is out of contract at the end of the 2015-16 season and speculation has already begun over his future.
Walcott in January 2013 signed a three-and-a-half-year deal, six months prior to the end of his existing agreement, ending talk of a departure from the Emirates Stadium on a free transfer.
He admits talks are still to begin on a new contract, but, after nine months out with a knee injury, his focus is on performing for the Gunners as they bid to secure a place in the top four of the Barclays Premier League.
Previously, Wenger has admitted that he wants Walcott to stay at Arsenal for the long-term – but warned there will be no guarantees of a first-team place.
Negotiations have started, albeit slowly, over the prospect of a new contract extension, with the England forward’s current £90,000-a-week deal not set to expire until the summer of 2016.
The landscape now, however, is much different to the last time the club were looking to secure Walcott’s future in what turned out to be a protracted saga before he eventually signed in January 2013, with the likes of Mesut Ozil, Alexis Sanchez and fellow England colleague Danny Welbeck also now on board.
Walcott, 25, has spent the last few games watching from the bench as he is eased back from a year out after a serious knee injury, and Arsenal are thought to want to sign him to reduce terms
Gareth Bale to reject Premier League offers
Gareth Bale isn’t returning to the Premier League next season, reports The Mail. Despite his struggles at Real Madrid this season and several English clubs possibly willing to meet his £75 million asking price, the Welshman is going to say no to a Premier League return because he wants to stay at the Bernabeu and prove himself at the club.
Ancelotti could replace Pellegrini at City
Manchester City want Carlo Ancelotti to take over as manager if they sack Manuel Pellegrini, according to The Express. Ancelotti has no assurances over his future at Real Madrid and the Citizens would be happy to pounce. City would love Pep Guardiola, but he looks unlikely to ditch Bayern Munich, while Diego Simeone just signed a new deal with Atletico Madrid, so Ancelotti is their man.Advertisement

Juventus to step up bid for Dzeko
Juventus are set to make Edin Dzeko a priority this summer and believe they can wrest the striker away from Manchester City, according to The Sun. Dzeko has fallen down the City pecking order and now finds himself behind Wilfried Bony, but has said that he wants to stay at the club. If another club comes calling, though, things may change and Juve want to have him up top with Carlos Tevez.
Liverpool want Papadopoulos
Kyriakos Papadopoulos wants to leave the Bundesliga and with Liverpool lurking, The Metro believe that the defender may find himself at Anfield next season. The 23-year-old defender has been excellent on loan at Bayer Leverkusen and they want to sign him permanently, but he has no interest. That gives Liverpool, who have scouted him for two years, the green light to get involved.
Hammers unlikely to keep Song

West Ham aren’t especially interested in keeping Alex Song and his £80,000-a-week wages next season, reports The Mail. The midfielder’s loan deal with the Hammers expires after the season and while Song did get off to a good start to the season, his form has dipped of late and made the club question whether Song is worth such big wages. For now, it looks like he’ll return to Barcelona.