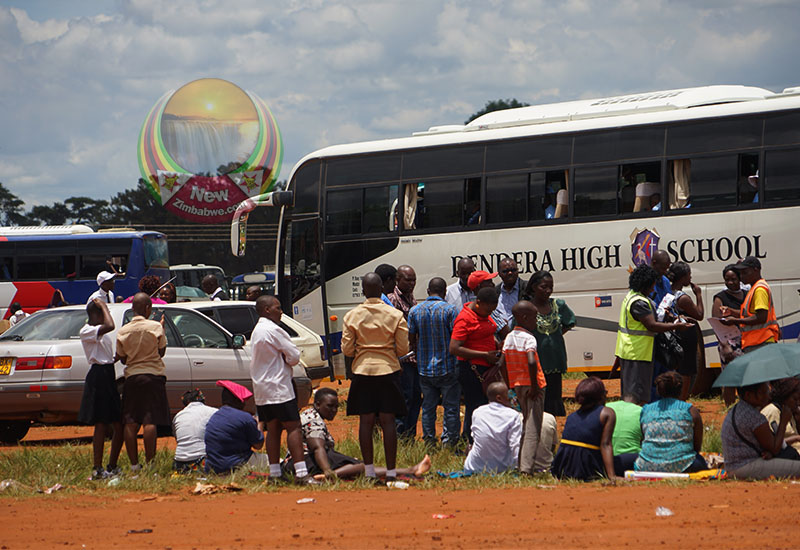 Back to school. Students wait for transport at pick-up points in Harare
Spread This News

WORRIED parents struggling to get their children to different schools across the country from pickup points in Harare have called on government to resolve issues with disgruntled teachers before their grievances affect progress in their second term studies.

Schools open this Tuesday amid fears teachers might engage in a go-slow or strike in protest over a devalued salary after a cushioning allowance advanced by government was wiped out by a raft of price increases across all basic commodities and beyond.

NewZimbabwe.com visited a pick-up point near Rotten Row Magistrates’ Courts in Harare, where most children waited patiently for transport to their respective schools and spoke to parents who felt it was government’s responsibility to ensure that the plight of teachers needed urgent attention.

Hazel Rupango, whose child is an Upper Six at Langham Girls, Anglican school said that she was finding it hard to cope as she had to raise RTGS$770 for fees, RTGS$500 for food and more for stationery.

“Government should make sure it handles this issue well; teachers should be given money because if government does not do that then our children will not get quality education which they deserve.

“Our school teachers were also on strike last time. Government should restore the dignity of our teachers,” said Rupango.

She added: “Our salaries are still the same, when I got here I was told my child could not board the school bus because I paid RTGS$660 instead of the RTGS$770…I have an Upper Six child who registered and will have to follow using public transport.

“Things are too expensive, even sanitary wear and I do not think there is any parent who is being paid as much as is being demanded as fees.”

Government had to shorten the April holiday after part of the first term went to waste as teachers went on a go-slow and before deadly protests left the country on the edge.

An RTGS$120 cushioning allowance by government to each one of its workers has also been eroded by the current economic crisis which has seen prices rise by more than 100 percent.

“This term’s preparations were really tough although school fees were not raised, we are expecting a top-up at anytime.

“When schools closed last time, a loaf of bread was RTGS$2.50 now it is around RTGS$3.50. So we will not blame schools if they are to hike fees. Government is not helping in any way to lower these prices,” said one mother who requested to be identified as Mrs Mushore.

The Zimbabwe Teachers Association (ZIMTA) and the Progressive Teachers Union of Zimbabwe (PTUZ) have both emphasised the need for government to make use of the Tripartite Negotiating Forum and engage with teachers.