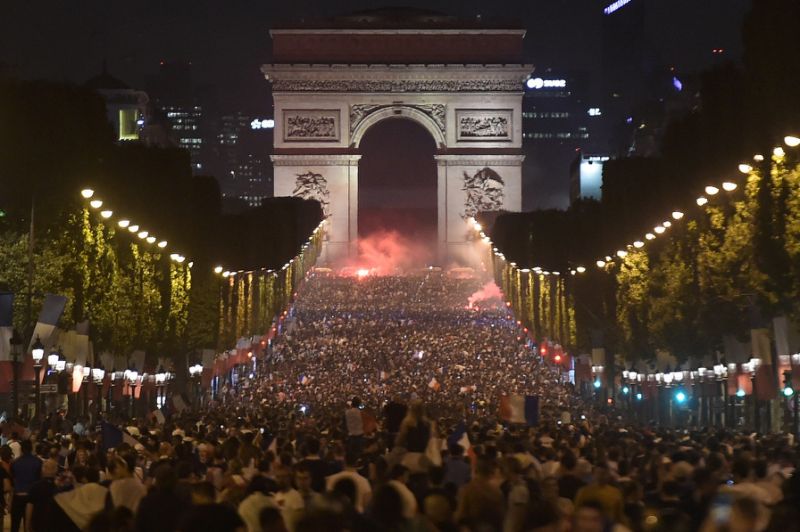 THE French national anthem La Marseillaise, chants of “We’re in the final” and a cacophony of car horns and fire crackers rang out over Paris on Tuesday as residents of the capital celebrated France’s march to the World Cup final.

A crowd of 20,000 gathered to watch Didier Deschamps’ team beat Belgium 1-0 in their semi-final in Saint Petersburg on a giant screen at Paris’ historic Hotel de Ville, or town hall.

With viewing space at a premium every vantage spot was occupied — with fans perched on trees, on top of vans, on dustbins and bus shelters.

Samuel Umtiti’s decisive goal in the 51st minute triggered the waving of a sea of tricolor flags as ecstatic supporters — many in the national team’s colours — kissed and hugged and danced.

“We are so proud to be French tonight!” the young girls explained as around them fire crackers exploded on the cobblestones.

Motorbikes, cycles, cars, dustbin lorries – they all came to a standstill to join in the celebrations. With France under high security since the November 2015 terrorist attacks the fan zone was policed by over 1,200 members of the security forces.

Fans, who had climbed on top of buses gingerly inching their way through the crowds, were dancing and waving flares and flags, as the bus driver fought a losing battle to get his passengers to their destination on time.

Many fans were too young to remember the last time France won the World Cup two decades ago.

Fans, fares and flags at the Hotel de Ville in Paris to mark France’s win over Belgium

“This team is fantastic,” he beamed.

“Boys, we’re world champions” one man in his 30s was heard telling his mates. “Stop that, you’ll bring us bad luck” he was reprimanded before the group of friends broke out into the chant of the night – “We’re in the final”.

From balconies, families waved the French national flag, children kitted out in Les Bleus shirts waved to the crowd below.

The Rue de Rivoli, normally choc-a-bloc with Tuesday night traffic, became a temporary pedestrian zone as crowds made their way along it past the Louvre to the Champs-Elysees, where 20 years earlier Paris had gathered to celebrate France’s sole World Cup win on home soil.

Two decades on, there was a sense of deja vu as thousands of euphoric fans turned the City of Lights’ most celebrated boulevard into a giant street party.

Up in the capital’s red light district at Pigalle in the 18th arrondissement, the neon lit-windmill outside the Moulin Rouge cabaret was shrouded in a haze of smokebombs and flares.

“It’s magnificent,” beamed Thierry Perier, 45, who was with his eight-year-old daughter.

“We needed this in France, we deserved it. We had the best players and for the moral of the French, to win the World Cup would be the best present ever,” he said, his voice hoarse from cheering.

Another fan, 17-year-old Lea was not even born when France won their one and only World Cup on a heady night at the Stade de France in a 3-0 triumph over Brazil.

Lea told AFP: “It’s so beautiful what’s happened. We are going to experience our own ’98’ now!”