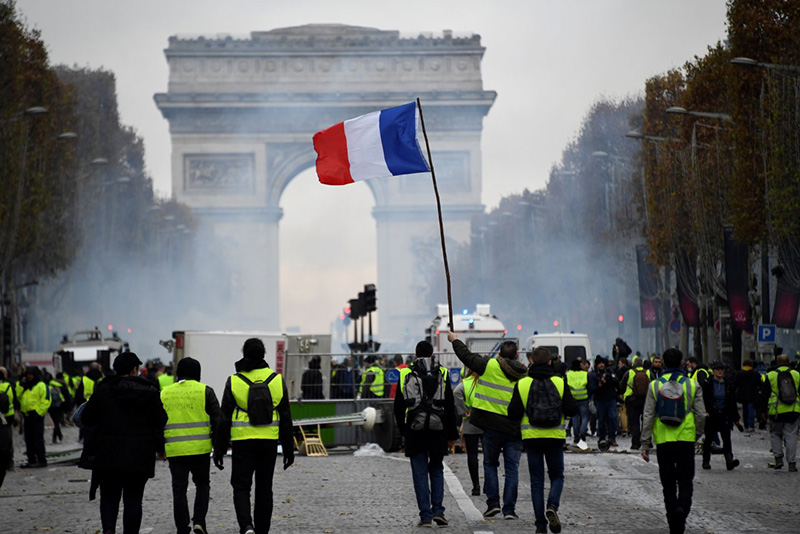 Some 3,000 police were deployed in the capital as demonstrators who have blocked French roads over the past week wearing their now signature high-visibility jackets were set to cause another day of disruption after calls to bring Paris to a standstill.

AFP reporters said several thousand had gathered by early Saturday on the famous Champs-Elysees where they clashed with police trying to prevent them moving down to the Place de la Concorde near the Louvre museum.

Police said the protestors had tried to break through a cordon several times but had been prevented from doing so, with tear gas used more than once.

“We have just demonstrated peacefully, and we were teargassed,” said Christophe, 49, who traveled from the Isere region in eastern France with his wife to protest in the capital. “We see how we are welcomed in Paris.”

Paris police authorities said Saturday’s incidents were linked to the “presence of members of the far-right who harassed the security forces.”

The ‘yellow vest’ protesters were seen ripping up paving stones or starting to build barricades.

The demonstrations were sparked by an increase in diesel tax, justified as an anti-pollution levy by the government, but have since morphed into a broad opposition front to centrist Macron.

“I hope there will be a veritable yellow tide,” one of the leaders of the movement, right-wing political figure Frank Buhler, said this week as he urged supporters to descend on Paris.

Protesters had converged early Saturday on the Place de l’Etoile at the top of the Champs-Elysee avenue, shouting “Macron resign”

But with some protesters baulking at the cost of travelling to the capital, it was unclear whether the organisers would achieve their aim of causing gridlock in the City of Light.

Protesters had converged early Saturday on the Place de l’Etoile at the top of the Champs-Elysee avenue, shouting “Macron resign”.

More than 35,000 people had vowed on Facebook to rally in the Place de la Concorde, a gathering banned by authorities due to its proximity to the presidential palace.

Police early Saturday had cordoned off the zone that included the Place de la Concorde, the National Assembly and a section of the Champs-Elysee.

“In this zone, no demonstration, no gathering, no march linked to the ‘yellow vests’ can take place,” said Paris police chief Michel Delpuech.

Police early Saturday had cordoned off the zone that included the Place de la Concorde, the National Assembly and a section of the Champs-Elysee

He said mobile police units backed by helicopters were ready to intervene in case of violence or attempts to block the Paris ring road.

Paris authorities have authorised a demonstration in a park next to the Eiffel Tower.

“The government has done everything to demonise the movement that will take place in Paris,” said Clement Jonie as he joined protesters gathering in the west of Paris early Saturday.

“We hear the deputies from the (governing) LREM say ‘we will hold the course’ but the movement is on its way, it is not ready to stop”, said the 47-year-old logistician, who had travelled in from the suburbs.

Two people have died and over 750 people, including 136 police officers, were injured during the week of demonstrations that shone a light on frustration over stagnant spending power and the rollback in public services in some areas of France.

On Friday evening, a man with an explosive device and demanding protesters be allowed to meet the French president turned himself in to police in Angers in western France.

“He demanded that the yellow vests be received at the Elysee” presidential palace, local prosecutor Yves Gambert told AFP.

Local official Bernard Gonzalez said: “There was a real risk, real danger, he had an explosive charge around his neck… This was not fake.”

Former investment banker Macron was elected on a pledge to put more money in workers’ pockets but the effects of his reforms on purchasing power — persistently shown as one of the biggest concerns of the French — have been limited so far.

Protesters in France are angry about an increase in diesel tax, justified as an anti-pollution levy by the government

The poor and low-paid are particularly incensed at his decision to hike anti-pollution taxes on diesel and petrol, while scrapping a wealth tax on the rich.

Opposition parties on the hard left and right have cheered on the protesters, whose revolt was described by 77 percent of respondents in an Odoxa poll for Le Figaro newspaper as “justified”.

“It’s the cry of a France that is struggling and fed-up,” Jordan Bardella, spokesman for the far-right National Rally (former National Front) said.

Macron, who is under pressure to tackle pollution ahead of European Parliament elections in which the environment is expected to feature prominently, has refused to back down on taxing polluters.

But with his ratings languishing at record lows of under 30 percent, he has sought to present a more empathetic side.

Next week, he will unveil a new energy plan that will aim to make the shift towards cleaner fuel and power more “acceptable”.

“We have heard the message of citizens,” one of his aides said on Thursday.

Revolts against taxes have been a feature of French public life for centuries — citizens pay some of the highest in Europe as a percentage of GDP — while fuel price protests are a common occurrence.