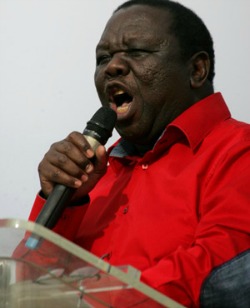 HONESTLY, while with brazen gusto people like Douglas Mwonzora and those of his ilk in the MDC (this includes the entire MDC-T leadership) would celebrate the recalling of MPs from the MDC Renewal team as a form of victory, someone should point out to them the folly of their actions.
Did our elders not warn us of this kind of collective idiocy as synonymous to that of a lizard that fell down a tall tree but still felt entitled to praise itself because nobody else did. We have a duty as actionists to offer them a critical appreciation of the idiocy of their actions before they celebrate that cheap malicious score as victory.
After all, do we not say that a flute player must sometimes stop to wipe his nose? That move was the worst for the struggle for democracy. If anything, some of these petty jealousies and un-strategic moves often bring the entire democratic ideation backwards.
It is high time people like Douglas Mwonzora get to know that by maliciously choosing to align with Jacob Mudenda just for him to score cheaply against Tendai Biti and others, this same move will come back to haunt them in the near future.
After all, it is a fact that when two comrades fight, a stranger reaps the harvest. Douglas Mwonzora should know that by tying the knot with Zanu PF one day he will be required to undo it. And that day won’t be far from now.
I also wish to make it known that some of us, activists from Matebeleland, have always known that people like Douglas Mwonzora, Gutu, etc, are always prepared to work with Zanu PF for a pittance; simply because their causes lack strong principles.
Honestly, is there a person who, in his normal senses, would align with Zanu PF, a band of thugs simply, to score a cheap one by selling a constituency that’s held by a comrade like Gorden Moyo – a person we all know will never be ZANU?
Consequently, this act of recklessness by the likes of Douglas Mwonzora and others who are supposed to be leaders in this democratic ideation must also be read within the broader narrative of what now manifests itself through these very painful and quite macabre killings of Zimbabweans in what is tending towards xenophobia in South Africa.
We all know that millions have crossed the border to South Africa owing to the idiocy of Mugabe’s leadership and that of his Zanu PF. But one would have expected those in a just cause for democracy to lead the way by suspending their idiosyncratic positions and forming a coalescence of ethos for the country to chart a strong united front against Zanu PF.Advertisement

Instead it’s even more shocking to note that people in the MDC-T are prepared to form a coalescence of sorts with Zanu PF, just to score cheaply against their fellow comrades!
At the same time, it appears that, by doing all this, they do not realise how that alone helps Zanu PF to continue on the path of plundering the economy and every available social space – thus forcing helpless citizens to cross the border to face some blood-thirsty South African mobs.
Someone should tell Douglas Mwonzora and his entire band of collective idiots that they too are guilty in these senseless killings of our innocent people in SA because, instead of choosing to fight a proper fight to end Zanu PF madness, they have chosen to go to bed with it; thereby punctuating the struggle for which thousands of people have died.
While the entire population is in a mess those in the opposition are at each other’s throats – busy ejecting each other from parliament and fervently celebrating such silly moves.
Robert Mugabe and his Zanu PF band of thugs, Douglas Mwonzora, Obert Gutu, Morgan Tsvangirai and the MDC-T should now shoulder the blame of allowing that economic madness to continue in Zimbabwe.
Even worse, they all have on their hands the blood of the innocent who are looking up to them for help and being helplessly brutalised in South Africa as they continue their quest for a decent life.
Brilliant Sigabade Mhlanga is a Senior Lecturer at the University of Hertfordshire.