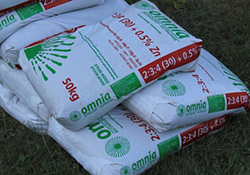 OMNIA Fertilizer Company has not come up with a single community responsibility project for the Banket community since its establishment in 1994, Parliament heard this week.
The company, which is wholly owned by Omnia South Africa but financed by a company in Mauritius, hosted the Agriculture Parliamentary Portfolio Committee this Monday as the committee sought to establish the company’s progress in disbursing command agriculture scheme fertilizer.
According to the managers, the fertilizer company has outlets in all of the country’s provinces.
After taking note of the challenges facing the firm, Zengeza West Member of Parliament Simon Chidhakwa then inquired on what the company, being a reckoned operator in the industry, has done for communities it is working in.
The three-member management team, comprising of Omnia Finance director Ann Munetsi, marketing manager Samukelo Moyo and blend manager Tawanda Masetsa, after a stretching silence, then took turns to narrate marketing activities instead of social corporate responsibility activities.
“We take graduates from Gwebi, Chibhero for attachments. If they do well we take them for employment that is our main thrust even universities such as university of Zimbabwe we do the same,” said Munetsi.
Moyo said, “I think we service our community in a way that most people fail to notice.
“Wherever our cash and carry outlet is, we are servicing the community by bringing them that service. We educate the community, that’s our main focus.”
Chair of the committee Christopher Chitindi interjected saying, “What you are talking about are strategies of making more money.
“That’s business. What we are talking about is building social amenities for the community, giving back into the community you are harvesting from.”
The managers continued to act confused until the committee eventually demanded that the company attends to the gap and vouched to follow up on them next year.Advertisement