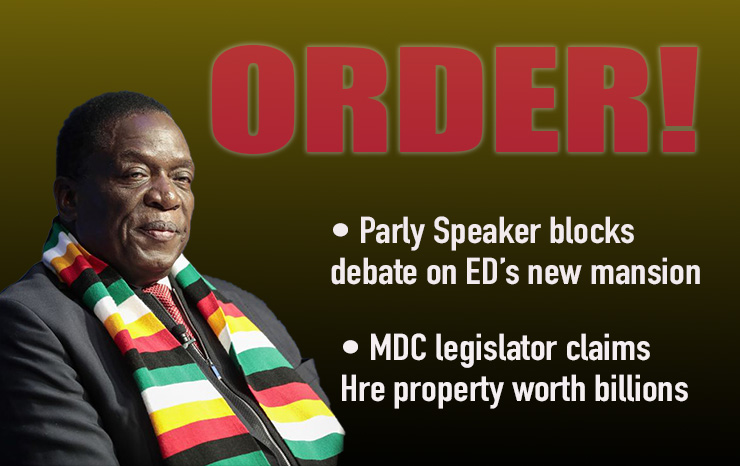 The Zanu PF leader also has a property in the prime Kwekwe farming area of Sherwood as well as a so-called ‘Village Castle’ in rural Zvishavane.

Mnangagwa’s administration has introduced tough measures as part of an austerity regime he says is necessary to set the country’s virtually tanked economy on the recovery path.

“The process of change is not smooth. Some pain and discomfort along the way is inevitable,” the president said in a recent opinion article.

However, an opposition legislator last week claimed that Mnangagwa was building a multi-billion-dollar private home while urging tightening of belts on Zimbabweans.

Zengeya started; “I am giving reference to the construction of the private residence which is a multi-billion-dollar property which is being constructed for His Excellency, Hon. Mnangagwa in Borrowdale off Crowhill…”

There were inaudible interjections from some of the MPs before Zengeya was stopped in her tracks by Speaker Jacob Mudenda.

Back in 2016, media reports claimed that government spent $3m buying houses for Mnangagwa and then co-vice president Phelekezela Mpokho.

However, after Mnangagwa took over as president following last November’s military coup, the security services reportedly expressed concern over the suitability of his property for security reasons.

Meanwhile, according to former higher education minister Prof Jonathan Moyo, Mnangagwa also has access to a property in the Avenues area of the capital.

Said Moyo in a recent interview with UK-based academic and political commentator Alex Magaisa; “I used to have endless meetings with Mnangagwa at his office … or at some house used by Mnangagwa on Churchill Avenue, just after Second Street towards Avondale”.

In addition to the Harare properties, Mnangagwa also has a farm in Sherwood, some 20 kilometres outside the Midlands town of Kwekwe.

Tensions spiked a notch when images emerged of Mnangagwa holding a mug inscribed ‘I’m The Boss’ during a Christmas party attended by loyalists at the Zvishavane ‘Village Castle’ in December 2016.

Mnangagwa and his Lacoste faction were then being accused of plotting to topple the ageing President Robert Mugabe who had ruled the country since independence in 1980.

Quipped Prof Moyo at the time; “pictures not only tell more than a thousand words but also deepen the power grab narrative!

“… Everybody knows that the Boss is Gushungo (Mugabe). One boss at a time, please! Kumhanya hakusikusvika veduwe (There is no need to rush).”

Mnangagwa repeatedly denied plotting a power grab. He however, took over power after Mugabe was toppled by a military could last November.