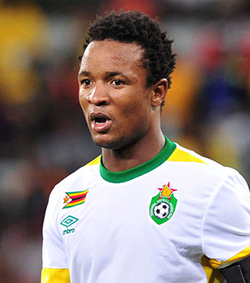 SOUTH Africa: University of Pretoria will continue to play Zimbabwean defender Partson Jaure despite the allegations of match-fixing that have emerged out of Zimbabwe this week.
Jaure was named by The Herald newspaper along with Polokwane City goalkeeper George Chigova as allegedly being involved in a match-fixing ring that could have spread its tentacles to the South African Premier Soccer League (PSL).
It should be noted though that no charges have yet been brought against the pair and they are presumed innocent until proven guilty.
The South African Football Association have dispatched investigators to Harare to meet with their Zimbabwe counterparts to learn more about what evidence is in place.
AmaTuks coach Shaun Bartlett says he cannot comment on a matter that is between national associations, but confirmed to KickOff.com that Jaure was available for selection for the vital PSL clash away at Mpumalanga Black Aces on Saturday.
But the centre-back has already been vilified in the Zimbabwe media with his former national team assistant coach Saul Chaminuka saying his performances in the COSAFA Cup held in South Africa last May were suspect.
ZIFA have alleged that matches in that competition, along with the 2016 CHAN tournament in Rwanda could have been rigged.
“It is now clear to me that some of players are being paid to influence results,” Chaminuka was quoted as saying in the Manica Post.

I have been in football for quite some time … Saul Chaminuka