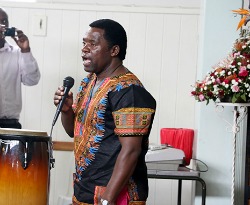 AFTER a very long wait due to immigration procedural delays, Pastor Lawrence Haisa is finally set to visit Australia for shows starting on Saturday the 7th of November.
The Burukayi hitmaker will be the second prominent Gospel musician to visit Australia after Pastors Charles and Olivia Charamba, who have had two well attended shows in the last two years. The addictive Takesure Zamar Ncube also visited Australia over two years ago, albeit through a rather private tour.
Music promoters in Australia have mainly focused on bringing in secular musicians like Winky Dee, Jah Prayzah, Oliver Mtukudzi, Aleck Macheso, and lately Suluman Chimbetu.
However, there is a huge presence of Pentecostal Christians within the Zimbabwean community in Australia, and promoters of the Haisa show are confident that the gospel musician will attract a significantly huge crowd at the planned shows.
Haisa will kick start the shows at Power Chapel Auditorium in Melbourne on the 7th, moving on to Sydney on the 14th, where he will perform at the Padstow Baptist Church.
He will wind up the tour with a show in Adelaide on the 20th.
The spokesperson for Afrojazz Promotions, working in collaboration with In2Worship Gospel Promoters, Emison Matema Uragu, says his organisation has a vision to bring as many African gospel musicians as possible, and this is only just the beginning.
“Pastor Haisa is a seasoned musician whose fan base extends beyond just the Christian community, and the fact that he will be holding family shows will make it a lot easier for families to bring in children,” said Uragu.
Some of the gospel musicians earmarked by the organisation for shows in Australia include, Michael Mahendere, Sharon Manyonganise and Pastor Gee.
The group even envisages bringing over the legendary Baba Mechanic Manyeruke from semi-retirement.