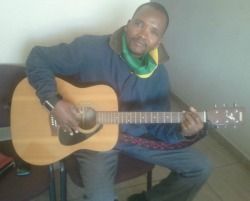 KARIBA-BASED Remnant Church leader Pastor, Philip Mugadza, has composed a single song titled Mugabe Must Fall, in which he is challenging the aged leader to immediately step down.
Mugadza, who is currently leading a 40 day anti-President Mugabe prayer at Harare’s Africa Unity Square, told NewZimbabwe.com that he was using all forms of communication to send the message to the 92-yeard old leader.
“I am sending a message over and over again that he has got to fall, and when we say he has to fall we are not talking of his death, but the system is the one which has to fall,” he said.
Pastor Mugadza said “we” are fighting against a repressive system and real progress can only be made when Mugabe leaves office.
“Mugabe represents a system, so when the old man falls, that repressive system also falls. And this is also a follow up to the on-going 40 days of praying for Mugabe’s fall.
“This is not a personal thing. We do not hate him (as Christians) it is even for his own good to fall,” said the cleric.
The anti-Mugabe cleric who was arrested for staging a solo protest against the Zimbabwean leader in Victoria Falls last year, said they were also assisting Mugabe to take a rest.
“We are saying he is 92 and he must rest. So we are pushing him to rest and it is good for health.  It is good for him, his family and it is good for the nation,” said Mugadza.
“Zimbabwe is supposed to be moving on bit it is being held back by him. So we are just asking him to release the nation”.
Some of the lyrics of the 3 minute long Mugabe Must Fall song Pastor Mugadza composed this weekend goes like,“Open the eyes of these man, let them see how they have destroyed Zimbabwe”.
Advertisement