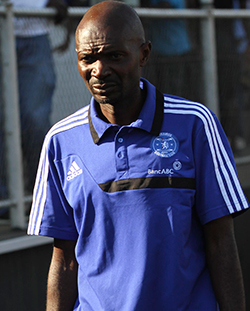 ZIMBABWE Under-23 coach Kalisto Pasuwa has made a U-turn after agreeing to take charge of the Young Warriors for the do or die African Championship qualifier against South Africa in Kwazulu Natal on Saturday.
Pasuwa had on Tuesday walked away from the team over non-payment of his salaries and allowances believed to be around $10,000. Zifa had promised to pay him his dues by June 30 but they have reneged on their promise and the coach ran out of patience.
However, after a meeting with his manager Gibson Mahachi, Pasuwa finally agreed to go and lead the team.
But Mahachi said that will be his last match whether they qualify or not.
“I had a meeting with the coach and agreed that he should go and finish this campaign and that will be it.
“There is nothing that has been paid but this is my own position after considering that the players have been phoning the coach asking him to lead them to South Africa,” said Mahachi.
The Young Warriors who were held to a 1-1 draw in the first leg in Harare now need an outright victory or at least a 2-2 draw to qualify.
The winner between the two teams qualifies for the finals to be held in Senegal in December where the top three teams from the tournament automatically qualify for the Olympic Games in Brazil.Advertisement