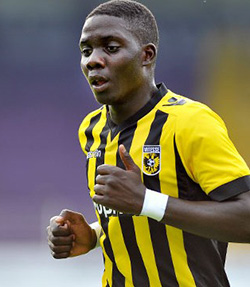 ZIMBABWE Under-23 head coach Calisto Pasuwa has called up at least five foreign based players including Brendon Galloway of English Premiership side Everton for an international football friendly match against Morocco in Marrakech next weekend.
Pasuwa who says he had videos of some of the players and wants to assess them in a game situation also wants Leeds United academy striker Munyaradzi Mbanje as part of the team.
He has also called up Northampton striker David Moyo, Marvellous Nakamba who plays for Netherlands topflight league side Vittesse and Mamelodi Sundowns winger Kuda Mahachi.
However, team manager Patrick Mutesva said of the five foreign based stars only Nakamba had confirmed his availability for the international friendly so far.
Pasuwa and his technical team were still trying to conclude negotiations for the release of the other foreign based players.
“The coach wants to look at some of these foreign-based players so we are still negotiating with their clubs to have them released for the practice match. But so far Nakamba has confirmed his availability,” said Mutesva.
Galloway, an Everton summer signing from MK Dons where he made 17 appearances and can also play as a defensive midfielder, has represented England at Under-17, Under-18 and Under-19 levels and is touted as the brightest prospect for both club and country.

He has played for England youth teams … Brendon Galloway