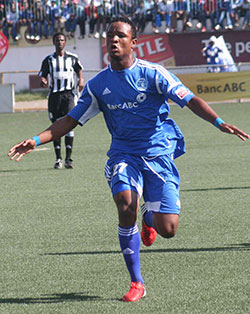 DYNAMOS coach Callisto Pasuwa is not too worried about his side’s poor showing against Triangle at home on Sunday.
The Harare giants edged the visitors 1-0 in a lacklustre performance that left fans verbally abusing Pasuwa despite gaining three points.
Dynamos were simply disjointed with star winger Ronald Chitiyo, centre back Partson Jaure and left back Ocean Mushure, the few lively players.
The strikers appeared to have gone to sleep tall afternoon with Patrick Khumbula, Simba Sithole and substitute Washington Pakamisa missing chance after chance.
“What is more important is that we managed to get the three points. The way we played does not matter much for now,” Pasuwa said.
“Of course we still have to work on our finishing but what matters is winning and I am happy about that. Yes we missed some good chances but that is something we can always work on and improve.”
The coach defended his forward Sithole who for the entire match was the chief culprit, guilty of fluffing numerous chances.
“I do not think Simba is not doing well. When we get the ball he has to position himself the way he does. That was our strategy,” Pasuwa said.
It was Dynamos’ third straight win, a first of such a string of wins this season so far.
They are now on third position on the log, just a point behind leaders Highlanders.