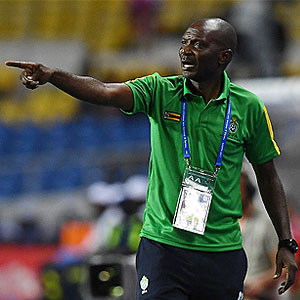 ZIFA vice president Omega Sibanda has said Kalisto Pasuwa is still the national soccer team coach despite media reports suggesting he has quit in the wake of the team’s exit from the African Cup of Nations at the group stage.
This follows a 4-2 drubbing at the hands of Tunisia in Zimbabwe’s last group game which saw them crashing out of the continent’s biggest football show case.
The Warriors quietly returned home at mid-day Wednesday and, on arrival, Pasuwa refused to comment on whether he had resigned or not.
However, Sibanda who was the head of delegation expressed surprise at the reports.
“Honestly I am surprised by these reports in the press. As far as I am concerned he has not resigned because he has not told me that.
“There is no letter he has written to that effect so I can’t comment on that,” said Sibanda.
ZIFA president Philip Chiyangwa said there was no way Pasuwa could resign in the press without informing his employers first.
“Who is saying that he has resigned? How can he tell you guys without informing us? As far as we are concerned he has not informed us about that.
“I don’t know where you are getting that from,” said Chiyangwa.
Pasuwa’s manager Gibson Mahachi also stressed that Pasuwa had not resigned.
“Can he resign in the media? Is there a letter to that effect? As far as I am concerned he has not resigned,” said Mahachi.
Pasuwa’s charges crashed out of the tournament without a win, becoming the worst Warriors side to represent the country at the finals since 2004 when Zimbabwe first qualified for the finals which were held in Tunisia.
In Tunisia, the Warriors, then under Sunday Chidzambwa managed a 2-1 victory over Algeria before defeating a then World Cup bound Ghana in Egypt in 2006 under the guidance of Charles Mhlauri.
And their third appearance at the continental showpiece came to a premature end on Monday night following the defeat to Tunisia, meaning the Zimbabweans managed just a single point from their three Group B games in Gabon after a 2-2 draw against Algeria in the opening match.
The Warriors coach came under a barrage of criticism over his team selection and tactics. But he has also had numerous personal battles in the job, most notably going for as many as nine months without being paid by ZIFA.Advertisement

The 46-year-old oversaw the Warriors’ successful AFCON 2017 qualification campaign following his appointment two years ago, after leading local giants Dynamos on a majestic run of four league titles in a row.