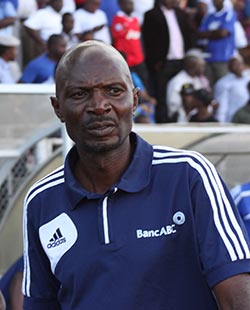 ZIMBABWE senior soccer team coach Kalisto Pasuwa has announced a 32-member squad headlined by several stars who were selected among the Soccer Stars of the Year ahead of the 2016 Orange African Nations Championship finals (CHAN) in Rwanda.
Caps United defender Stephen Makatuka, Dynamos defenders Ocean Mushure and Elisha Muroiwa are also in the team so is Premier Soccer League top goal scorer Knox Mutizwa who scored 14 goals in 17 starts among other stars.
The tournament, designed exclusively for home based players, will be held in Rwanda from January 16 to February 7.
Pasuwa has blended youth with experience in his squad to strike the right balance for a tough campaign.
The Warriors gaffer has indicated the need for thorough preparations ahead of the CHAN finals.
“We need to prepare adequately as this group is tough,” said the coach.
“All these teams Zambia, Uganda and Mali have a large number of locals representing their senior team in their Afcon qualifiers.
“They are well organised and have solid structures.
The coach expressed his wish to reach the final in Rwanda next year.
“It’s our wish as Zimbabwe to progress to the final and have a good run in the tournament,” said Pasuwa.
Zimbabwe were drawn in Group D of the 2016 African Nations Championship finals along with Cosafa rivals Zambia, Mali and Uganda following the draw that was conducted at the Serena Hotel in Kigali.
The Warriors finished fourth at the 2014 tournament which was hosted by South Africa.
Zimbabwe’s Warriors have appeared at every final tournament since the inception of the CHAN tournament in 2009.
Zambia will be making their second appearance at the Chan finals tournament having qualified for the first edition held in Ivory Coast in 2009.
West Africans Mali have participated at the CHAN finals since 2011 and at the previous tournament were eliminated by Zimbabwe at the quarter-final stage.
East Africans Uganda have been steady campaigners since 2011 and will be making their third appearance at the CHAN finals. The Cranes have never made it past the group stage of the tournament.
In the 2014 CHAN tournament, Uganda were in group B together with Zimbabwe and held the Warriors to a goalless draw at Athlone stadium in Cape Town.
ZIMBABWE SQUAD Advertisement