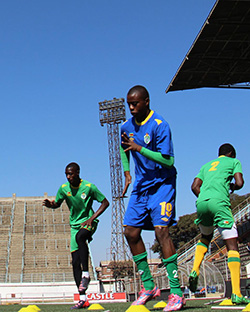 KALISTO Pasuwa heaved a sigh of relief of relief Thursday morning as the Warriors finally got their African Nations Championships (Chan) preparations underway after a two-day delay.
Church-man, Walter Magaya, who helped sponsor the team’s road trip to Malawi, also turned up at the training session to wish the team well.
The Warriors play the Comoros, who arrived in Harare on Wednesday night, in the first leg, first round of the Chan qualifiers at Rufaro Stadium on Sunday.
The tournament is designed for locally-based players.
Pasuwa has been negotiating his terms of employment with Zifa and training, which was scheduled to start on Wednesday, was called off.
But on Thursday, the Warriors held two training sessions at Rufaro under the watchful eye of Pasuwa and his lieutenants Saul Chaminuka and Nation Dube.
Speaking after the second evening session at Rufaro, Pasuwa said: “I think everything has gone on well today (Thursday).
“I know most of the players in the team as I have been working with them in the Under 23 side and some played in Malawi on Saturday.
“So we will dwell more on tactics because of time limits, but overall, I am happy with their response and fitness levels.”
On Comoros, he said he would focus on his own training than opponents.
“I know little about them, so I will focus on my own team. But what I know is that there is no small team in football these days.
“Swaziland beat Guinea and that shows that football is developing and other countries are doing well. So it’s best for us to focus on our own strengths and weaknesses,” Pasuwa said.

Return matches are set for July 3-5, and the first round for successive weekends during October where Zimbabwe could either face Botswana or Lesotho if they clear the Comoros hurdle.
Launched in 2008, the brainchild of Confederation of African Football (CAF) president Issa Hayatou has been won by the Democratic Republic of Congo in Abidjan, Tunisia in Khartoum and Libya in Cape Town.
The shock Libyan triumph last year was remarkable as the north Africans won only one of their six matches, drawing the other five, including all three in the knock-out stages.Advertisement

Libya triumphed in the 16-team competition thanks to penalty-kick accuracy and nerves of steel, winning a quarterfinal, a semifinal, and the final against Ghana via shootouts.
They are among 42 countries chasing 15 places at the 2016 finals while Rwanda qualify automatically as hosts of the January 16-February 7 tournament.