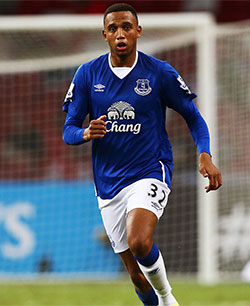 WARRIORS coach Callisto Pasuwa is sweating for the availability of England-based duo Brendan Galloway and Tendayi Darikwa, which he included in his 27-man squad to face Swaziland in back-to-back 2017 Afcon qualifiers over the Easter holidays.
Pasuwa drafted in Everton left-back Galloway who is yet to pledge international allegiance to Zimbabwe.
Galloway has played for the England Under-17, Under18 and Under-19 teams.
On the other hand, Darikwa who turns out for Championship side Burnley as a right-back has however before said he will accept a Warriors call-up.
Warriors manager Saharif Mussa said they are working hard to convince the wingbacks to be available for national duty.
“We are doing the best so that we can on bring them to the squad. We are constantly trying to make them available for the selection of the coach. The coach picks a player and we talk with him to verify if he is available,” said Mussa.
Zimbabwe goes into the Swaziland matches fresh from a match-fixing storm associated with these matches.
A plot to fix this match was busted by Zifa earlier this week.
“We as the technical team only manage the players and our selection is not influenced by the ongoing match fixing issue, these are administration issues,” said Pasuwa.
Zimbabwe are second in Group L tied on four points with leaders Swaziland who enjoy a superior goal difference.
“We want to play well and win the six points at hand but this is a back to back tie within a short period so the team with strong mentality and fitness can easily win it,” added Pasuwa.
The team is scheduled to begin camp on 20 March preparing for the crucial games.Advertisement