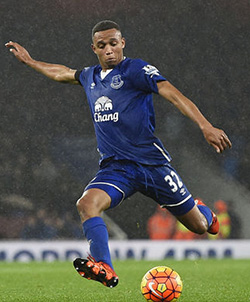 WARRIORS coach Kalisto Pasuwa says he will reconsider England-based stars Burnley defender Tendai Darikwa and Everton defender Brendon Galloway for the 2017 African Cup of Nations finals to be staged in Gabon in January.
The Warriors gaffer said he would continue to try the best combinations for the team in the build-up to the tournament.
Zimbabwe booked a ticket to the finals with a game to spare after overcoming Malawi in Harare in June.
They play their final Group L match against Guinea in Conakry on Sunday but that match has lost significance as the Warriors are already through to the January tournament.
“As the technical team we are always looking for good players and as for the England based guys like Darikwa and Galloway, they have not been responding positively to come and play for the national team,” said Pasuwa.
“They were maybe weighing up to see if they could play for Zimbabwe or England. But we will try to reconsider them in the build up to the January tournament, they might have made a decision on the national team they want to play for.”
With Zimbabwe having already sealed a place at Africa’s greatest football soccer showcase following a three-0 victory over the Flames of Malawi in Harare in June, their final Group L match against Guinea in Conakry, will also be used as a dress rehearsal for the Gabon tournament.
The Warriors are unbeaten in five games in the qualifiers in which they won three — twice against Malawi and once against Swaziland.
They played out two draws against Guinea in Harare and Swaziland away from home.
Galloway, who has now been loaned to West Brom for the season, has featured for England at junior level and has been fancying his chances of eventually becoming a full-fledged England international. He was born in Harare before relocating to England at the age of six.
Darikwa was born to expatriate Zimbabwean parents in Nottingham and raised in West Bridgford, Nottinghamshire, which makes him eligible to represent both Zimbabwe and England.
The two stars have been previously called up to the national team but are yet to come.
However, Darikwa gave a subtle hint that he could be considering a future with the Warriors, who impressed him with their victory over Swaziland in their Afcon 2017 Group L qualifier early this year.Advertisement

Darikwa had been called-up to be part of the squad in the two matches against Swaziland, but he told Zifa he could not make it, as he had personal issues to sort out.
He was however, the first to congratulate the Warriors for their victory.
“Well done @online_zifa on today’s result,” the 24-year-old wrote on Twitter at the time, in a post that he accompanied with a Zimbabwe flag.
Meanwhile, the team is expected to leave for Guinea today.