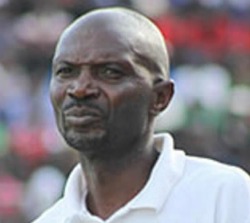 WARRIORS coach Callisto Pasuwa is wary of Zimbabwe’s 2016 Cosafa Cup Group A opponents and also says he is yet to make up his mind on including foreign-based players in his squad.
Zimbabwe will arrive at the Cosafa Cup to be hosted by Namibia next month, hunting for a record fifth title of the regional premier tournament.
But they will first have to deal with getting out of Group A which also includes Swaziland, Madagascar and Seychelles.
But Pasuwa sees potential upsets in their group opponents.
“It is a cliché in football but it is true, there are no small teams these days and no easy games. All countries are very well prepared and will provide us with a challenge. We will certainly not be underestimating anybody. But we are preparing well and to the same standard that we always do,” Pasuwa said.
“It starts in training, if you put the hard work into training, then you can get the rewards in the match. We do everything to the best of our ability and that has been paying off for us recently with the results we have been getting.”
If Zimbabwe manage to negotiate their way past the group stages, they will meet Zambia who are waiting for them in the quarter-finals.
Just like Zimbabwe, Zambia also boast of four Cosafa titles and are as well keen to claim one more than their southern neighbours.
“We have to concentrate on our group matches first and if we progress, then we can worry about Zambia. We will take every game as it comes and if that means we face Zambia in the quarterfinals then so be it. We will be ready,” said Pasuwa.
The Cosafa Cup comes at a time when a number of Zimbabwe’s foreign stars in Europe and South Africa would be on off-season.
That makes Pasuwa spoilt for choice in his squad selection but he said he is yet to make a conclusion on including the abroad-based players or go with entirely the home-based contingent.
“That is something we are still working on, it is difficult for me to say now but it is perhaps a question I can answer in two weeks’ time,” he said.
Zimbabwe had a horrible Cosafa outing last year where they failed to get past the group round.
Last year’s squad included South Africa-based players like Partson Jaure and George Chigova.Advertisement