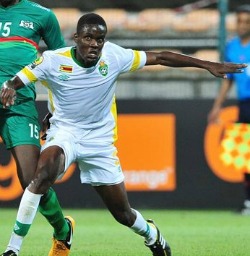 WARRIORS coach Kalisto Pasuwa is fretting over the fitness of team captain Danny “Deco” Phiri ahead of the Chan tournament to be held in Kigali, Rwanda next year in January because of injury.
The 2015 Soccer Star of the Year who guided his club, Chicken Inn, to their maiden championship this season has a swollen ankle and failed to finish the training session conducted Sunday morning.
He also sat out the afternoon training session. Coach Kalisto Pasuwa said the Warriors captain had a scan and was now awaiting a report from the doctor.
“Danny has a swollen ankle. He couldn’t finish training in the morning. He had a scan and we are now waiting for a report from the doctor. The doctor’s report will guide us on whether he should continue with training or we send him back home,” said Pasuwa.
The Warriors coach also revealed that Highlanders defender Teenage Hadebe had been excused from camp to attend to his sick mother and is also another doubt to make it to the tournament.
Pasuwa also said goalkeeper Takabva Mawaya also had a shoulder injury and needed further assessments by the doctor to ascertain the extent of the injury.
“We have also excused Teenage Hadebe after he told us he wanted to attend to his sick mother. We also have goalkeeper Takabva Mawaya who has a shoulder injury. Last time when we called him up for the Under-23 he had the same problem and it appears it has resurfaced again. He will need further assessment by the doctor,” said Pasuwa.
The Warriors coach also said they would continue to assess the fitness level of some of the players as he suspected that they could be carrying injuries.
“We will have to continue to assess some of the players because I know that some of them might be injured but are not honesty about it because they just want to go to the tournament. I have been a player before and I know that players do that,” he said.
The Warriors gaffer also said the break had affected them and will have to keep on assessing the players’ fitness level. “It’s like we are starting all over again after breaking for seven days. So we need continuous assessments of the fitness level of the players,” said Pasuwa.
The Chan tournament, designed exclusively for home-based players, is expected to kick off in Rwanda from January 16 to February 7.Advertisement

The Warriors, who are in Group D together with perennial rivals Zambia, West Africans Mali and East African football kings Uganda, will be based in the border town of Gisenyi.
Zimbabwe has featured at every tournament since its inauguration four years ago. They finished in the last four at the last edition held in South Africa.