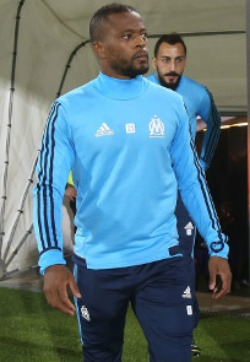 Olympique Marseille full-back Patrice Evra has been banned from European club football for the rest of the season, Uefa said on Friday, and is leaving the French Ligue 1 club by mutual consent as his career looks to set to come to an ignominious end.
The former France international was sent off on before kick-off in Marseille’s November 2 Europa League match at Portugal’s Vitoria Guimaraes, where he had been named as a substitute, after appearing to aim a kick at a fan at pitchside during the warm-up.
The 36-year-old has been suspended from all Uefa club competition matches until June 30.
In a statement on their website ( www.om.net ), Marseille said he was leaving the club.Advertisement

“He has done something irreparable by reacting to shameful provocations from a few individuals,” the statement read.
Evra, who started his professional career in 1998, played for Monaco, Manchester United, Juventus and Marseille, winning five English Premier League and two Italian Serie A titles as well as one Champions League title with Manchester United in 2008.