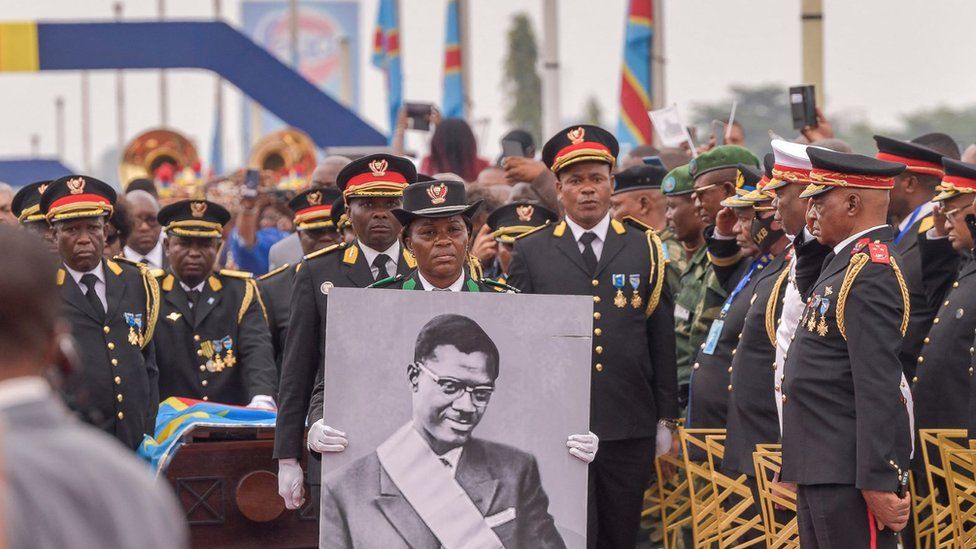 The gold-crowned tooth of Democratic Republic of Congo independence hero Patrice Lumumba has been buried more than 60 years after he was assassinated.

It is the only part of his body that exists after his remains were dissolved in acid.

The Belgian policeman who oversaw the disposal took the tooth as a trophy.

It was returned to the family last week and has toured several parts of DR Congo in a coffin.

People have been able to pay their respects ahead of the funeral that took place in the capital, Kinshasa, on a road named in his honour.

President Félix Tshisekedi, Lumumba’s family and other dignitaries were at the private service which took place before the coffin was transferred to a specially built mausoleum.

“May the land of our ancestors be sweet and mild to you,” said the president.

Lumumba was the country’s first prime minister and one of the leaders of the struggle for independence. He was also seen as one of the most prominent voices in Africa’s anti-colonial movement.

But it viewed Lumumba as a barrier to its efforts to maintain influence as well as hold on to important economic interests.

In a famous speech on independence day in 1960, in front of Belgian dignitaries including King Baudouin, Lumumba, aged 34, castigated Belgium saying that the Congolese had been held in “humiliating slavery”.

The Belgians were stunned as a black African had never dared speak like this in front of Europeans.

Lumumba was toppled as prime minister just over two months later. Then in January 1961, with the tacit backing of Belgium, he was shot by a firing squad, along with two allies.

Other Western powers were also suspicious of him, fearing that he was sympathetic to the USSR during the Cold War and some, including the US, plotted to assassinate him.

A Belgian policeman, Gerard Soete, was given the job of getting rid of the evidence. It was during that process that he pocketed the tooth and took it back with him to Belgium.

It was decades later that he revealed that he still had the tooth and only two years ago that a Belgian court ruled that it should be returned to the family.

The Covid pandemic delayed the process but last week it was handed over in Brussels.