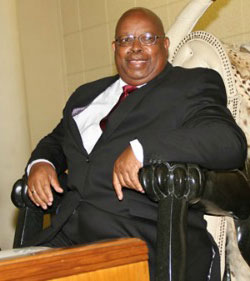 THE recent confession by Speaker of Parliament, Jacob Mudenda that he witnessed the torture and gruesome murder of more than 20 000 people in Matabeleland and parts of Midlands during the dark years of Gukurahundi in the early 1980s by soldiers from the 5 Brigade, but was powerless to stop it makes a sad but regrettable reading
Why Mudenda has chosen to speak after 27 years of silence is not known but what remains salient is the fact that there is no retreat from the ubiquitous challenge posed by the continued lack of political will on the need to create peace and dialogue on Gukurahundi.
Mudenda made these sensational claims during a three-day men’s fellowship conference organised by the Brethren–In-Christ church in Lobengula under the theme, “Peace and Justice” where he was guest speaker. He said although he witnessed it, he was too powerless to stop it. It boggles one’s mind why, given the assumption that he has power today, he has not sought to seek redress on the matter.
President Mugabe, soon after independence, enunciated a policy of National Reconciliation in his famous speech where he said, “surely this is now the time to beat our swords into ploughshares so we can attend to the problems of developing our economy and our society. I urge you whether you are black or white, to join me in a new pledge to forget our grim past, forgive others and forget, join hands in a new amity, and together as Zimbabweans, trample upon racialism, tribalism and regionalism, and work hard to reconstruct and rehabilitate our society as we invigorate our economic machinery”.
Since then there is virtually no debate on this issue which remains sensitive till now. Every attempt to bring up this issue has been treated with cruel hostility and clampdowns. Thousands of people who disappeared during Gukurahundi remain unaccounted for.
The Unity Accord of 1987 finally put to an end to this massacre but it didn’t address the process of healing and reconciliation that the President had identified as a remedy to aggression. One hurdle that makes healing and reconciliation a herculean task is how reconciliation can work where those who burnt other people’s houses, raped women and killed many don’t show remorse? For example it’s a public secret that Perrence Shiri, the current Air force chief, was the commander of the 5th Brigade that carried out Gukurahundi in Matabeleland and yet he has never been tried before any court but rather was actually rewarded with a top post.Advertisement

The findings of the two probe committees established by Mugabe – that is the Chihambakwe and Dumbutshena commissions – were never made public and it remains unclear what recommendations they made. For a long time the Zanu PF government has successfully avoided direct discourse on the Gukurahundi atrocities but when you have a political figure like Mudenda confessing to the nation the barbaric ordeal of how innocent women, men and children were brutally killed by the 5th brigade it shows beyond doubt that Zimbabwe is nation that is in dire need of healing, reconciliation and peace.
The Parliamentary and Presidential elections in 2008 present yet another scenario that makes healing and national reconciliation healing evitable. Violence, torture, murder, arbitrary detentions, disappearances, maiming of opposition supporters prompted Morgan Tsvangirai to withdraw from the election race. His supporters had limbs cut off and, today, they still carry these scars while the perpetrators walk free.
When the Government of National Unity was formed, the new administration responded by establishing the Organ on National Healing, Reconciliation and Integration (ONHRI).The purpose and aim of the ONHRI was to establish a mechanism for national healing, cohesion and unity and laying the foundation for a society characterised by mutual respect, tolerance and development.
But ONHRI was composed of members from political parties involved in skirmishes who themselves were not clean in terms of their utterances. One questions the wisdom of entrusting the process of national healing and reconciliation to partisan individuals. Of course, this proved a futile exercise and the organ didn’t deliver its mandate till its mandate expired.
The truth is that the past should be revisited and confronted. Atrocities of the past have to be acknowledged and in some cases apologies made or even reparations paid, where necessary, since there is no healing without justice. Victims and perpetrators of conflict and violence have to be at the centre of reconciliation and healing activities.
Reconciliation is an absolute necessity today. It is a guarantee that the violence which happened in the past will never occur again. Victims of Gukurahundi as well as the election periods, especially the 2008 vote, have not told their stories. They remain in the abyss of pain and neglect. The truth remains hidden or is being told from the perspective of those in power. The truth they tell is one-sided and therefore wounds remain open.
Mudenda is now Speaker of Parliament and, in that capacity these are some of the debates that he should initiate by any and all means possible. He should now use that office to make past wrongs, right. Instead of giving a lame excuse to the few men at the fellowship that the government is sorry, he should initiate the healing process. The new constitution that is in place provides for the establishment of the National Peace and Reconciliation Commission (NPRC) which is not functional till now. Whether it will deliver or not, remains a mystery. Only time will tell.
Rawlings Magede, is a rural political enthusiast who writes from Zimbabwe.rawedge699@gmail.com