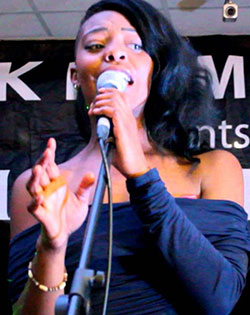 ZIMBABWEAN songstress Pearl Natasha Waungana is making waves with new hit “Take Control/Ndiwe”, yet again earning a nomination in the UK-based BEFFTA awards held recently in London.
The BEFFTA awards recognise the hard work and talent achieved by entertainers in music, ﬁlm, arts and journalism and Pearl Natasha has been nominated in the Best Unsigned Act category.
Pearl Natasha was born to Zimbabwean parents and moved to Derry, Ireland as a young girl.
The 22-year-old has established herself as a familiar face on the music scene through her dedication and hard work.
She has won the regard of many, regularly performing in support of big Zimbabwean superstars like Oliver “Tuku” Mtukudzi, Winky D, Sulu, Jah Prayzah, Nox, Stunner, Thomas Mapfumo and recently, the rap duo Tehn Diamond and Jnr Brown in venues such as the Coronet Theatre, London and Hyde Park.
Natasha is currently riding high after returning to the UK from a recording trip in Zimbabwe which has seen her work with award winning producer, Begotten Sun on her upcoming EP.
Her ﬁrst single, “Take Control” is currently making waves across stations in Africa and with performances lined up internationally in the up-­coming months; it seems like she is well on her way to stardom.
The single is a product of a sun-­soaked trip home allowing the songstress to develop and grow while being surrounded by the vitality and energy of Zimbabwe, its people and its beauty.
Natasha is also receiving international radio airplay with her single “Free”.
“Take Control / Ndiwe” is available on iTunes, Spotify, AmazonMP3 and all major digital Platforms.
Rufaro Dhliwayo of Project A&R said, “We have made it free to download through SoundCloud as well for a limited period of time.”
A remix of the track features collaboration with Zim favourites Dhadza D and rapper Tehn Diamond.
Take Control / Ndiwe Remix