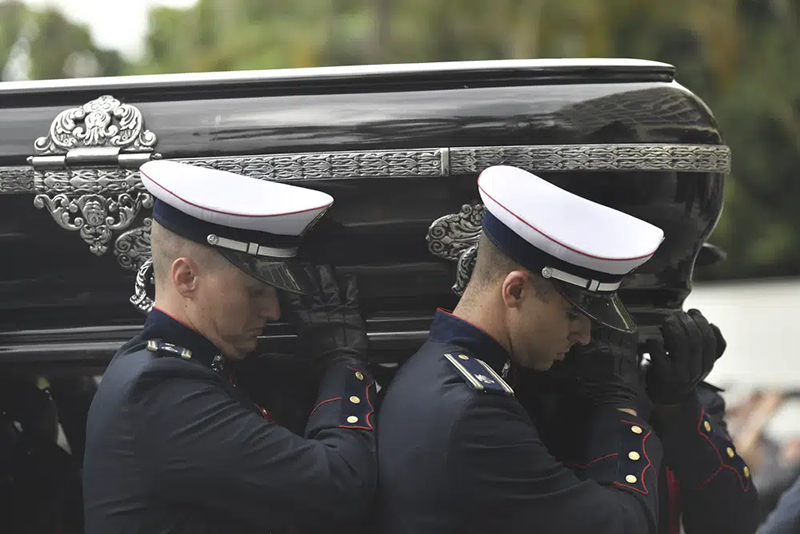 SANTOS: Brazil said a final farewell to Pelé on Tuesday, burying the legend who unified the bitterly divided country.

Newly inaugurated President Luiz Inácio Lula da Silva paid his respects at Vila Belmiro, the stadium where Pelé played for most of his career.

Pelé died last week at age 82 and was laid to rest in Santos, the city where he became famous after moving there at age 15 to play for Santos FC. The funeral Mass was held at the team’s Vila Belmiro stadium before his black casket was driven through the streets of the of Santos in a firetruck.

It was taken into the cemetery as bands played the team’s official song and a Roman Catholic hymn. Before the golden-wrapped casket arrived, attendees sang samba songs that Pelé liked.

Some Brazilian soccer legends weren’t there.

“Where’s Ronaldo Nazario? Where’s Kaká, where’s Neymar?” asked Claudionor Alves, 67, who works at a bakery next to the stadium. “Do they think they will be remembered like Pelé will? These guys didn’t want to stop their vacations, that’s the problem.”

Geovana Sarmento, 17, waited in a three-hour line to view Pelé’s body as it lay in repose. She came with her father, who was wearing a Brazil shirt with Pelé’s name.

“I am not a Santos fan, neither is my father. But this guy invented Brazil’s national team. He made Santos stronger, he made it big, how could you not respect him? He is one of the greatest people ever, we needed to honour him,” she said.

Caio Zalke, 35, an engineer, wore a Brazil shirt as he waited in the line. 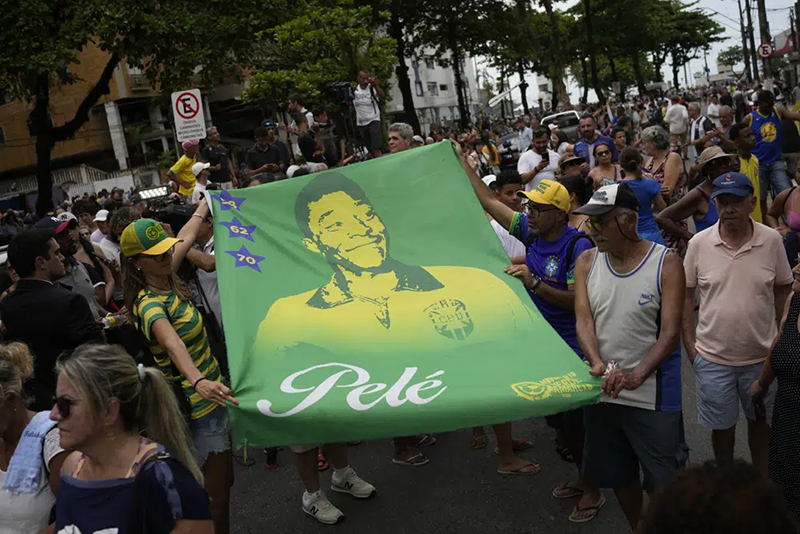 Pelé in the 1960s and 1970s was perhaps the world’s most famous athlete. He met presidents and queens, and a civil war in Nigeria was put on hold so people could watch him play. Many Brazilians credit Pelé with putting the country on the world stage for the first time.

Rows of shirts with Pelé’s No. 10 were placed behind one of the stadium’s goals, waving in the city’s summer winds. A section of the stands filled up with bouquets of flowers placed by mourners and sent by clubs and star players — Neymar and Ronaldo among them — from around the world as loudspeakers played the song “Eu sou Pelé” (“I am Pelé”) recorded by him.

The crowd was mostly local, although some came from far away, and many mourners were too young ever to have seen Pelé play. The mood was light, as people filtered out of the stadium to local bars, wearing Santos FC and Brazil shirts.

Claudio Carrança, 32, a salesman, said: “I never saw him play, but loving Pelé is a tradition that goes from father to son in Santos. I learned his history, saw his goals, and I see how Santos FC is important because he is important. I know some Santos fans have children supporting other teams. But that’s just because they never saw Pelé in action. If they had, they would feel this gratitude I feel now.”

Among those at the stadium was Pelé’s best friend Manoel Maria, also a former Santos player.

“If I had all the wealth in the world I would never be able to repay what this man did for me and my family,” Maria said. “He was as great a man as he was as a player — the best of all time. His legacy will outlive us all. And that can be seen in this long line with people of all ages here.”

FIFA President Gianni Infantino told journalists that every country should name a stadium after Pelé.

“I am here with a lot of emotion, sadness, but also with a smile because he gave us so many smiles,” Infantino said. “As FIFA, we will pay a tribute to the ‘King’ and we ask the whole world to observe a minute of silence.”

Another fan and friend in line was Brazilian Supreme Court Justice Gilmar Mendes.

“It is a very sad moment, but we are now seeing the real meaning of this legendary player to our country,” Mendes told journalists. “My office has shirts signed by Pelé, a picture of him as a goalkeeper, also signed by him. DVDs, photos, a big collection of him.”

Pelé had undergone treatment for colon cancer since 2021. The medical centre where he had been hospitalised said he died of multiple organ failure as a result of the cancer.

Pelé led Brazil to World Cup titles in 1958, 1962 and 1970 and remains one of the team’s all-time leading scorers with 77 goals. Neymar tied Pelé’s record during this year’s World Cup in Qatar.