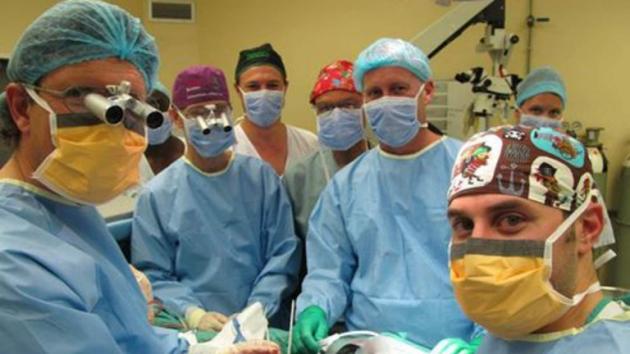 THE recipient of the world’s first penis transplant is reportedly going to become a father.
Just six months after the 21-year-old man’s surgery was successful, his surgeon said his girlfriend says she is pregnant, the South African outlet News24 reported.
Doctors say this is clear evidence the “transplant worked”.
Experts were predicting it could take two years for the South African patient to regain all functions, yet tests showed this had been achieved in just four months.
The unnamed man had required a penis amputation when he was 18, following a botched circumcision.
He is still being regularly checked over by doctors, who want to see if improvements can be made to the procedure.
More men could undergo the operation as soon as mid-August, according to local media.
The surgery could eventually be offered to men who have lost their penises from penile cancer, or as a last-resort treatment to people suffering from severe erectile dysfunction.
Back in March, Professor Andre van der Merwe, who led the surgical team, had described the procedure as a “massive breakthrough”.
He explained: “There is a greater need in South Africa for this type of procedure than elsewhere in the world, as many young men lose their penises every year due to complications from traditional circumcision.”
Experts estimate as many as 250 penis amputations happen in the country every year.
“For a young man of 18 or 19 years, the loss of his penis can be deeply traumatic,” he added.
“He doesn’t necessarily have the psychological capability to process this. There are even reports of suicide among these young men.”Advertisement