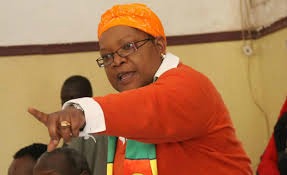 WHEN a wife or a husband for that matter is in an abusive relationship, most of the time they do not realize that they are. They generally believe that it is their duty to withstand the abuse in the interest of either maintaining the marriage or just for the sake of their children. (ndongarira vana vangu)
It is when that wife or husband, through an act of God or other somehow, exits that relationship, that they question themselves as to why they withstood such a relationship for so long.
In Zimbabwe, it took political leaders to be dismissed from the Zanu PF party to realize they have been stuck in an abusive relationship for many years. An abusive political culture where power and all authority is held by one individual and every other political player takes instruction in a top down political system.
Zanu PF party has dominated the political landscape ever since the ill-fated Unity Accord between ZAPU PF and ZANU PF in 1987. The Unity Accord is seen by many as an emotive pact as it saw the former PF ZAPU surrendering all autonomy and its very existence to Zanu PF.
President Mugabe has grown older and his strangle hold on the party and government has had no letting off. As it is natural in any political system, agitation to succeed him has become stronger and political players even those closest to him found themselves in the political wilderness after they sought to exercise their Constitutional right, the right to contest for political power.
December 2014 saw Mugabe again rock the unified government when he fired the vice president of the country Dr. Joice Mujuru and several cabinet ministers on yet to be proven allegations. In an unconstitutional move that went contrary to the spirit of the Zanu PF constitution, no due process was offered to those dismissed and the party constitution was amended to give sweeping dismissal powers to Mugabe. The president is now Zanu PF and every other party member is at his mercy. He fires and hires at will – “he appoints and disappoints”. The same sweeping powers saw the appointment of a virtually unknown PF ZAPU cadre, Phelekezela Mphoko to the post of vice president as a cosmetic attempt to hold up the 1987 unity agreement.
The dismissal of the Zanu PF cadres including former vice president Dr Joice Mujuru could not have come at a better time. It was a welcome release from an abusive relationship in which power was yielded by one person. Their in-trays were merely directives of pre-determined instructions from one person. As we celebrate unity, Zimbabwe, we need to be mindful of the fact that the most important form of unity now available to us is the unity of purpose. We need to unite as a people and rid Zimbabwe of an abusive political culture. Advertisement

It is time the people of Zimbabwe become the primary drivers of policy. The people of Zimbabwe have to now put in place a responsible government that puts people first. We need to rid ourselves of a top-down system of government that dictates to the people instead of ruling with their consent. Zimbabwe, as 2016 beckons, let us be mindful of the fact that Zimbabwe will rise and fall on our watch. We need a unity of purpose to rid ourselves of a system of government that has impoverished millions of our people, forced many citizens to flee into the diaspora in search of a better way of life.
Zimbabwe will rise and fall based on how we act. The People First project offers Zimbabweans a unique opportunity to unite under the leadership of a tried and tested leader who has been the vice president of Zimbabwe for over 10 years. The People First project does not question were you have been, it questions were you want to go. Zimbabwe more than ever needs a unity of purpose. A unity that puts People First. A unity to create strong political institutions that will rid Zimbabwe of the political culture of patronage, BUILD strong institutions based on PEOPLE FIRST, BUILD strong institutions that are not corruptible.
As we look into the future let us be mindful of the fact that only we Zimbabweans can change Zimbabwe. No one else will do it for us. Only us Zimbabweans can say enough is enough. We are tired of an abusive government and an abusive political culture. It is time and the time is now.