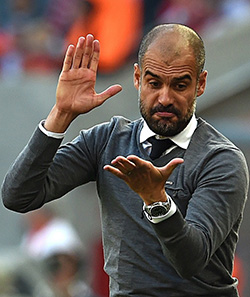 BAYERN Munich coach Pep Guardiola shot down swirling rumours of a possible move to Manchester City next season, saying he would see out his contract at the German champions.
“Boys, I have said it 200 million times that I have one more year on my contract here,” the Spaniard told reporters ahead of Wednesday’s Champions League semi-final, return leg against Barcelona in Munich.
“Next season I will be here and that’s all there is to it,” said Guardiola, who won the domestic double last season and the league title in the current campaign.
But he has not enjoyed the European success he was hired to achieve back in 2013 and a 3-0 Champions League first leg defeat at Barcelona could spell the end of their run this season.
A 1-0 loss to Augsburg in the league on Saturday further fanned speculation about the Spaniard’s stay in Munich after what was the fourth straight loss for Bayern in all competitions, something that had not happened since 1991.
Several media had reported on Sunday of a pre-agreement with City.
After securing the Premier League title last season, City boss Manuel Pellegrini has endured a difficult 2014/15 with his side fading from the title race and meekly bowing out in the Champions League last 16 to Barcelona.
That prompted speculation that Guardiola could arrive at the Etihad Stadium next season, with some media outlets suggesting Guardiola had become disenchanted with life at the Allianz Arena.Advertisement