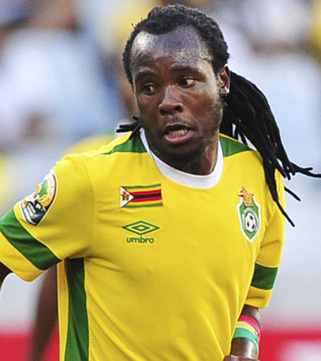 FORGOTTEN former Highlanders and Warriors midfielder Peter ‘Rio’ Moyo has finally moved back to South Africa where he has joined National First Division side Witbank Spurs.
Moyo made his mark for the Warriors in the Chan finals in South Africa early in the year and was immediately signed by Absa Premiership side Mpumalanga Black Aces before being unceremoniously dumped without kicking a ball.
Spurs spokesman George Khumalo said they were now awaiting for a work permit for the dreadlocked midfielder.
“He has been training with us for two months and impressed. We are just waiting for his work permit for him to start playing,” Khumalo said.
Spurs, where Highlanders goalkeeper Munyaradzi Diya also went for trials in January, is owned by South African-based Zimbabwean Themba Mafu.
Meanwhile, FC Platinum striker Donald Ngoma and Harare City hitman Francesco Zekumbawira are due to leave for South Africa in due course for trials with Platinum Stars and Maritzburg United respectively.
The two players are being handled by Harare-based agent Edzai Kasinauyo, who said he was impressed with the players during the just ended Castle Premiership.
“I am sure with their type of play, they can make the grade in South Africa,” Kasinauyo said.
Maritzburg is home to Khumbulani Banda, who was at Highlanders, and Terence Mandaza, who was previously in Botswana.
Cuthbert Malajila, now at Mamelodi Sundowns, was also at Maritzburg two seasons ago.Advertisement