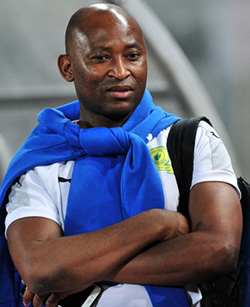 FORMER Warriors captain and Mamelodi Sundowns team manager Peter Ndlovu has cleared the air on Khama Billiat, following accusations by Warriors team manager Wellington Mupandare that he was blocking the forward from joining camp.
Ndlovu, who flew into Harare together with Billiat on Wednesday, said the criticism levelled at him was unjustified and unfortunate as he remained committed to the cause of the national team.
The Mamelodi Sundowns team manager is one of the longest serving members of the Warriors with a career spanning over a decade.
Ndlovu was the first captain to lead Zimbabwe to the African Cup of Nations in Tunisia in 2004 under Sunday Chidzambwa. He also led them to Egypt two years later before he retired from international football.
Billiat was included in the squad to face Liberia by Warriors coach Norman Mapeza even though Sundowns had said he was injured.
The Zimbabwean international was side-lined during Mamelodi Sundown’s clash against Esperance of Tunisia in the Caf Champions League last week on Friday.
And Ndlovu told journalists during a press conference in Harare Wednesday that Billiat was indeed injured and that he never blocked the player to join camp.
“People were saying he (Khama) is not coming. Now he is here. As you know Khama is injured. I have his medical history with me. I have everything with me,” said Ndlovu.
“Just to give you a background of the old Zimbabwe set up with Sundowns; it’s a norm, when a player is called up, we request for travel arrangements so that we know where our player is and how we can arrange and facilitate so that he comes back as quickly as he can.
“So, Zifa did not send the travel arrangements to us; they sent them to the player. That is the reality and true story.
“We acknowledged the call up and said we need the itinerary to go with it. At the same time, we sent them the medical history. Khama has not been training for five weeks at Sundowns.”
The former Warriors captain also spoke about his loyalty to Zimbabwe.
“As a Zimbabwean first, why would I not want Khama to come and perform for the country? I want to win things. I want him to win things. Why would I (block him)?
“Why would I (undermine) Zimbabwe? For me, I am Zimbabwean; Khama is Zimbabwean and we must represent Zimbabwe and honour that.Advertisement

“I personally spoke to the team manager. There was another mistake on the ticket sent to Khama. It had no date of return and he had to correct that.”
Ndlovu said he had only travelled to Harare to present Khama to the Zimbabwe medical team as they wanted a second opinion on the condition of the player. He warned that it would be a risk to play him when he was injured.
Billiat was immediately assessed by the Warriors medical team and concurred that the player was injured indeed and ruled him out of the clash against Liberia at the National Sports Stadium on Sunday.