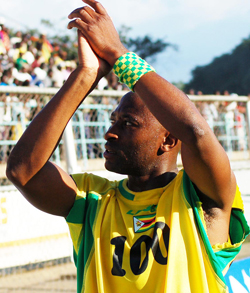 FORMER Warriors captain, Peter Ndlovu, says he is so proud of his national team jersey that if he was to give it away it would only be to President Robert Mugabe.
The Highlanders legend was speaking to the BBC’s Where Are They Now? programme. The series tracks down former English Premier League players from Africa.
He said, “This is my number one jersey and I can only part with this jersey to present it to my President, Comrade Robert Mugabe. This I can give to my President.”
Proudly displaying his shirt, Ndlovu said, “This is my national team jersey that I wore with pride.”
“Every time that I wore this jersey, I was trembling to do well. I was actually challenged to do well because leading the national team, everything is in your hands regardless of whether you score or not. The important thing is the national flag,” added Ndlovu.
Ndlovu became the first black African player to play in the English Premier League since its inauguration in 1992. He played in the top-flight league for 11 years.
He is one of the longest serving African players to work in England having spent 14 years at Coventry City, Birmingham, Huddersfield and Sheffield United clubs.
He joined Coventry from Highlanders where he played while he was still a school boy at Mzilikazi High School.
In 1990, he was joint soccer star of the year with George Nechironga. The following year, having played just over half of the season before leaving for England, he was also named soccer star of the year.
He has previously said his best goal was the one he scored against South Africa during Africa Cup of Nations qualifier at the National Sports Stadium in 1992.
Ndlovu is currently the team manager at South African Premiership club Mamelodi Sundowns.
He was capped 100 times as a Warriors player from 1991 to 2007, scoring 38 international goals. He was not known to miss a penalty.
He became the first captain to take the Warriors to Afcon finals in Tunisia in 2004.Advertisement