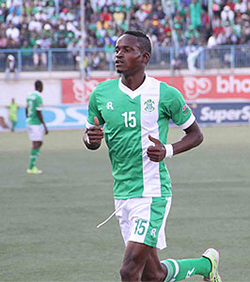 HARARE: Caps United received a major boost yesterday, following the return of injured full back Ronald Pfumbidzai and Ronald Chitiyo to training, ahead of the trip to the Democratic Republic of Congo, for the Caf Champions League first round first leg clash next weekend.
Pfumbidzai did not play a part in the 3-1 victory over old enemy Dynamos, in the Zimbabwe National Army Charities semi-final on Sunday, after sustaining a knee injury during the Caf Champions League victory over Lioli of Lesotho.
Caps United eventually won the encounter against Lioli 2-1, to qualify to the first round on a 2-1 aggregate victory, after they had been restricted to a 0-0 draw in Maseru in the first leg.
Coach Lloyd Chitembwe, said that he is happy that the players have started training again as they prepare for the trip to Mazembe.
Pfumbidzai got a knee injury, during the match against Lioli of Lesotho and Chitiyo; he picked up a minor injury on Sunday. He had a thigh problem, but he has already started training with the rest of the team.
“It’s good that both players are back in training. Right now we need to have everyone in the side, as we prepare for a tough encounter away in DRC.
“We want to go there and come back with a win or at least a draw. To do that we need all these players and it’s a boost for us that they are both back in training,” Chitembwe observed.Advertisement