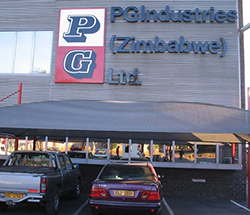 STRUGGLING PG Industries has restructured its debts and operations as part of a strategy to turnaround its fortunes, the company said Tuesday.
Kudakwashe Waniwa, the company secretary said the group reduced its short-term borrowings from $4, 433 million in January to $958,151 by November.
“This balance is being restructured to a three-year facility,” she said in a trading update on Tuesday.
Waniwa also noted that the company – suspended from the Zimbabwe Stock Exchange in December last year – was in the process of converting debentures and accrued interest to ordinary share capital as would long-term borrowings of $7,5 million after approval by the shareholders in January last year.
She said a $1, 1 million three-year loan facility, with a fixed annual interest rate of 12 percent per annum, was raised at the end of June. The funds were used to acquire stocks and raw materials while a receipt of $1 million from Private Placement Equity Agreement is pending sanctions of the scheme.
The group’s scheme of arrangement, which was unanimously approved by shareholders in March, however, is yet to be registered following an intervention by one of its creditors. The group expects the impasse to be resolved in the first quarter of next year.
PG Industries is heavily undercapitalised and needs massive cash injection to ensure its equity position moves from negative to positive.
Market watchers assert that the company is currently technically insolvent.
Waniwa noted that during the course of 2014, PG Industries realised $1, 070 million from property disposal.
“Proceeds from these disposals were used to settle $336,169 bank loans, with the balance used to purchase stocks and raw materials. A property/debt swap was completed resulting in the full settlement of $3 138 525 secured bank loan,” she said.
She said the group’s business units, PG Building Suppliers and PG Timbers, were successfully merged into one operating division of PG Merchandising Limited. This resulted in the operations’ branch network being reduced from 18 to 15.
“PG Glass will be divisionalised from January 1, 2015. Zimtile will only be divisionalised after settling amounts due to the former minority shareholder,” said Waniwa.Advertisement