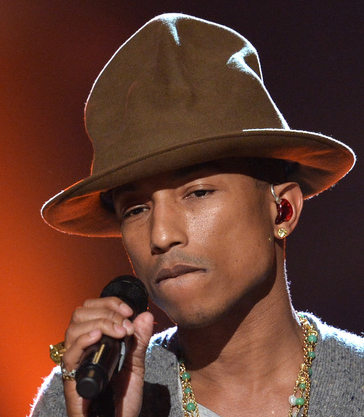 PHARRELL Williams has told a court that, while he was trying to evoke the feel of Marvin Gaye’s music when he created the hit Blurred Lines, he did not copy the singer’s work.
The singer said he was familiar with his song Got To Give It Up but did not use it as a basis for the track which he collaborated on with Robin Thicke and T.I.
Williams said he grew up listening to Gaye’s music: “He’s one of the ones we look up to. This is the last place I want to be.”
Williams, Thicke and T.I. are being sued by Gaye’s children who claim Blurred Lines infringes their father’s copyrights for 1977’s Got To Give It Up, but Williams’ testimony is crucial because he wrote the song’s music and most of its lyrics.
Although Thicke received a song-writing credit on the song, he acknowledged earlier in the trial that he didn’t do much work on the song.
T.I.’s rap track was added later, and Williams said he wasn’t involved in its inclusion in Blurred Lines, which was nominated for a Grammy Award.
T.I., whose real name is Clifford Harris, was expected to be among the case’s final witnesses.
Blurred Lines has earned more than $16m in profits and more than $5m apiece for Thicke and Williams, according to testimony offered earlier in the trial.
Williams said after the song was released, he saw similarities between Blurred Lines and Gaye’s work but said that wasn’t a conscious part of his creative process.
Richard S. Busch, who represents the Gaye family, asked Williams whether he felt Blurred Lines captured the feel of the era in which Gaye recorded.
“Feel,” Williams responded. “Not infringed.”
Thicke brought a bit of showmanship to a trial that has focused on minute details of chords and sheet music. He performed elements of Blurred Lines and hits by U2 and The Beatles to show how different songs can include similar-sounding musical elements.
Williams did not perform any music during his more than one hour of testimony at a Los Angeles courthouse, and complained that audio comparisons of Blurred Lines and Got To Give It Up had been created in a way that made them sound similar.
Williams’ career as an artist-producer has been booming in recent years, with the singer performing his hit Happy at the 2014 Oscars just weeks after winning three Grammy Awards for his work with Daft Punk.Advertisement