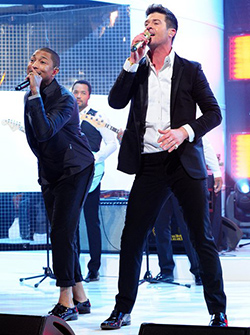 A US JURY has sided with the family of Marvin Gaye, determining that Robin Thicke and Pharrell Williams copied parts of Gaye’s song “Got to Give It Up” for their hit, “Blurred Lines.”
The jury awarded the late Gaye’s family approximately $7.4 million in damages. Williams will pay about $1.6 million and Thicke will pay about $1.77 million.
The jury ruled Clifford Harris, the rapper known as T.I. who performed on “Blurred Lines” and received a co-songwriting credit, did not infringe on the Gaye copyright.
Gaye’s daughter, Nona Gaye, wept in court as the verdict was read.
“Right now, I feel free,” Nona Gaye said after the verdict, according to The Associated Press,
“free from … Pharrell Williams and Robin Thicke’s chains and what they tried to keep on us and the lies that were told.”
Howard King, an attorney representing Williams, Thicke and Harris, told reporters he didn’t even discuss possible damages in his closing arguments because he didn’t think the jury would impose them.
For the same reason, he said, his clients declined to settle out of court.
“My clients know in their heart that they wrote that song independently and were not going to be held up,” King said.
He added that he believed the decision by the jury of five women and three men could affect the music the public gets to hear because it may make record labels hesitant to release work strongly inspired by a particular genre, song or artist.
Thicke, Williams and Harris, via a joint statement from Thicke’s representative, said, “While we respect the judicial process, we are extremely disappointed in the ruling made today, which sets a horrible precedent for music and creativity going forward.
“We are reviewing the decision, considering our options and you will hear more from us soon about this matter.”
The lawyer for the Gaye family, Richard Busch, said the case was not about songwriting inspiration, it was about copying.
“Throughout this case, they made comments about how this was about a groove and how this was about an era and how this was about a genre,” Busch said. “It wasn’t. It was about the copying of ‘Got to Give it Up.'”
The dispute began in 2013, when Thicke, Williams and Harris filed a lawsuit against the Gaye family to defend themselves against a public accusation that they stole parts of “Got to Give It Up.”Advertisement

Later that year, the Gaye family counter-sued. Then, in 2014, a judge sided with Gaye’s loved ones, ruling that their musicological experts provided sufficient evidence for the case to go to trial.
During the trial, which began late last month, Thicke admitted on the stand that “Got to Give It Up” was one of his favorite songs. King said Williams also idolizes the work of Gaye, who died in 1984.
In addition to listening to testimony, the jury was expected to listen to the snippets of “Got to Give It Up,” performed from copyrighted sheet music, to decide whether Thicke, Williams and Harris were guilty of copyright infringement.