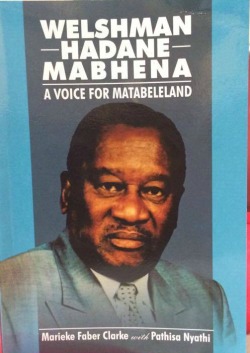 A BIOGRAPHY of the late former Matebeleland North governor Welshman Hadane Mabhena has been released.
Titled Welshman Hadane Mabhena –A Voice for Matabeleland, the book contains details of how the former Zapu Secretary General fought against marginalization of Matabeleland by the government.
The book, co-authored by Marieke Faber Clarke and Pathisa Nyathi also narrates the late nationalist’s personal experiences as well as how he was unceremoniously dismissed from the government in 2000.
“When Welshman Mabhena was Governor, the President’s control over state institutions included the placing of Shona speakers in charge of even the first year of education. As a result, small children were not learning their mother tongue from native speakers. Mabhena would criticize this policy and strongly oppose it,” said JZ Mzilethi, a former Matabeleland North provincial administrator under the governorship of Mabhena.
Mzilethi said Mabhena would regularly talk about underdevelopment in Matabeleland compared to other regions.
“Mabhena thought that Ndebele children with better qualifications were held back from studying in Mashonaland. He did not hesitate to speak out on this issue together with Joshua Malinga .They called for the enrolment of local children in local government institutions,” added the former PA.
The book also gives an insight into the fall out between President Mugabe and the veteran nationalist after the MDC won the majority of seats in Matabeleland in 2000.
“In 2000, MDC won lots of seats when Welshman was still in Zanu PF. As to be loyal to the Unity Accord, a governor should be above party politics, so he went to the MDC victory part. Soon after this, he was dismissed,” said Mabhena’s brother Timon, in the book.
In the book, Mabhena’s wife, Rebecca also revealed that MDC-T president, Morgan Tsvangirai once approached the former governor with a view of persuading him to join his party.
“Tsvangirai (Morgan) wanted Welshman to join the MDC. But Welshman refused,” said Mabhena’s wife in the book.
The book describes the former political detainee as a principled person who did not engage in corrupt activities.
“Unlike the people who remained in power, Welshman never built up wealth. He was so unaware of his own rights that he was not even a member of a medical aid scheme five years before his death,” reads the book.Advertisement

The former governor died in October 2010 at the age of 86 after a long struggle with diabetes and high blood pressure. Mabhena was declared a national hero but his remains are interred at Lady Stanley Cemetery in Bulawayo after he, prior to his passing on, gave instructions that he did not want to be buried at the National Heroes Acre in Harare.