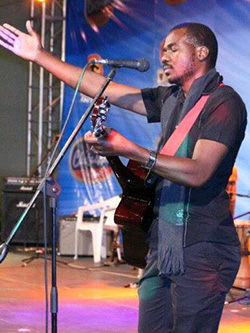 PHILANTHROPIC South African based Zimbabwean jazz artist, Bothwell Nkomo, has been honoured by the International Organisation for Migration (IOM) for his outstanding humanitarian work.
Popularly known as Bozoe in the music circles, Nkomo was presented with the award during Africa Day celebrations in Johannesburg May 25.
He was elated with the recognition.
“This is a special award to me,” he said, “It is an appreciation for my humanitarian work. The award shows that I have achieved part of my goal since I have long considered myself a humanitarian artist.”
In March this year, Nkomo collaborated with fellow musicians from Southern Africa to record a DVD which denounces anti-foreign resentment – xenophobia – among the region’s divided peoples.
South Africa’s Khabonina Qubeka and Moonga Mkandawire from Zambia are some of the musicians who were involved in the project.
“The song (Shona) is about social cohesion, ubuntu/hunhu (humanity) and cultural revival,” Nkomo said.
“We are all foreigners. If you moved from Tsholotsho to Bulawayo or Harare, you are still a foreigner; therefore we should peacefully live together.
“We breathe the same air, have the same blood running and share the same sun and should therefore love one another.”
Bozoe has also been visiting South Africa’s prisons, among them, Johannesburg prison (known as Sun City) and Leeuwkop prison to sing to the prisoners as both entertainment and motivation.
“On Tuesday, I will be going to Boksburg prison to sing and encourage them not to lose hope. This is part of rehabilitating them by the department of Correctional Services who invited me as part of the June 16 commemorations.
“I have been visiting them to sing for them so that they do not lose hope in life. My song Bekezela relates to them a lot and they love it. It talks about a distant lover telling her to wait for him.”
Even though he plies his trade abroad where his talents have earned him better financial rewards, Nkomo still wants to assist his artist compatriots back home while also training upcoming artists around the world, as well as feeding the hungry.
Nkomo, who was raised by a single parent, said his benevolence would target orphans and half orphans.
In 2011, he took part in the Africa-US project where he went to San Francisco and recorded two songs with other artists from different parts of the world, contributing to a 17 song CD.Advertisement

During the 2010 soccer World Cup hosted by South Africa, he also entertained those watching the matches at fan parks.