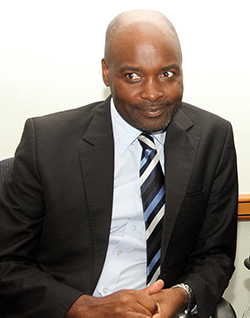 PREMIER Soccer League (PSL) chairman, Twine Phiri, has bounced back into his position as the boss of the topflight after having being booted out by the new ZIFA board led by Philip Chiyangwa.
After the board’s first meeting in Harare on Monday, Chiyangwa had announced that they had resolved to order PSL to hold elections for a new representative on the ZIFA board.
It was argued this had been necessitated by changes that took place at Caps United where incumbent chairman Twine Phiri was no longer in control of the club after Farai Jere took over as majority shareholder.
The Zifa board argued that Phiri was no longer representing the PSL on the ZIFA board because of those changes.
However, Caps United insisted they had seconded Phiri to represent the club on the PSL board of governors, forcing ZIFA to rescind their decision.
It also emerged that ZIFA could not order elections at PSL according to the league’s constitution, unless the 16 clubs decided to recall Phiri, whose term ends in 2018.
Phiri said he was still the legitimate PSL chairman and represented the clubs on the ZIFA board until 2018. He said it was important to meet with the new ZIFA leadership to enlighten them on the issue.
In a statement Thursday, ZIFA appeared to acknowledge that Phiri was still the PSL chair despite that his mandate had earlier been revoked by councilors on October 3 which booted out the Cuthbert Dube led board.
A PSL chairman gets automatic qualification into the ZIFA board.Advertisement