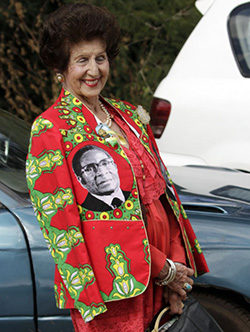 THE late Miss Zimbabwe chair and top Harare socialite Kiki Divaris was laid to rest in Harare on Wednesday.
Divaris – a leading member of the local Greek community – died aged 90 at a private Harare hospital last Saturday.
She was declared a liberation heroine by the ruling Zanu PF party, becoming the first woman to be granted the honour.
Divaris struck up a friendship with President Robert Mugabe, after independence in 1980 and was close to both his first wife Sally and his current wife Grace.
She first made headlines when shortly after independence she designed a gown for the first Miss Zimbabwe competition.
She handed over the beauty pageant business three years ago to Mary Chiwenga, a former model she tutored who went on to become second wife of Constantine Chiwenga, the country’s defence forces commander.
The Chiwengas attended Wednesday’s burial.
Below are some pictures from the burial: