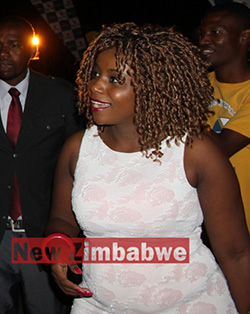 SANDRA Ndebele launched her seventh album at the Large City Hall in Bulawayo Thursday evening with SMEs minister Sithembiso Nyoni among the guests at the colourful event.
The dancer and singer was supported by Jah Prayzah and Jeys Marabini among other atists as she launched the ten track album ‘Izenzo’ which she describes as a reflection of the people of Zimbabwe and their identity.
Speaking in interviews ahead of the launch, the energetic dancer and cultural ambassador said the album gives a new feel to her old flavour in order to appeal to a wider and different audience.
“I’m just looking at things and how we behave as people in the society. I have tried to tackle most human activities in the album,” she said.
“People must look forward to numerous shows from me since I’m going to be on stage full time promoting my album.
“I’m also going to hold joint shows with some artists I have featured on the album.”
Below are some pictures from the event …

Putting on a show … Sandra Ndebele performs with Jah Prayzah