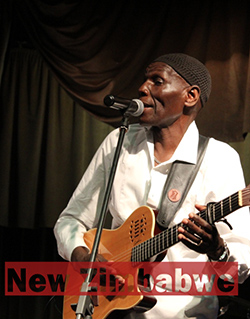 DENDERA star Sulumani “Sulu” Chimbetu Friday stole the limelight from music legend Oliver “Tuku” Mtukudzi at a joint show in Bulawayo.
Tuku and Sulu shared the stage at the Large City Hall, with the former the main attraction and the latter playing a supporting role.
Tuku was compensating for his Bulawayo fans after failing to make an appearance alongside South African Afrojazz maestro, Ringo Madlingozi in February.
Fans of both Harare-based musicians packed the council owned venue to witness two of Zimbabwe’s leading entertainers in action.
While many expected Sulu to take to stage first as the curtain raiser, Tuku performed first, belting some of his favourite hits.

Tuku who over the years has been known for his energetic performances, seems to be slowly losing his touch.
His performance, throughout the two hour set, was tepid, a telling sign that whatever is troubling him maybe taking its toll on his music career which has spanned for over three decades.
However, his popular songs such as Shamiso, Madiro and Neria got the revellers dancing.
After Tuku’s performance, the youthful and energetic Sulu took over and immediately upped the tempo with the hit song, Phone, off his latest album, Gunship.
The crowd went into a frenzy and pushed to the front of the stage forcing security details to step aside.

The crowd’s favourite was definitely the track Nyuchi, which he was forced to perform about three times.
He also dished out tracks such as Idah Nhoro and some of his father’s popular songs such as Pane Asipo and One Way.
Overally, the show was a success and the turnout was very impressive, busting the myth that Bulawayo residents do not support arts events.