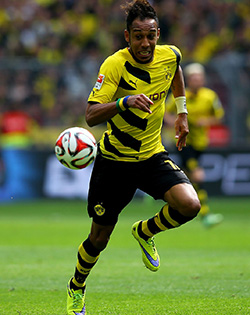 GABON striker Pierre-Emerick Aubameyang narrowly beat Ivory Coast’s Yaya Toure to win the Confederation of African Football’s player of the year award.
In a vote of coaches and technical directors of Caf member nations, Aubameyang earned 143 points, with Manchester City midfielder Toure, 32, the runner-up with 136 points.
Aubameyang, 26, is the first player from his country to win the award.
Ghana and Swansea midfielder Andre Ayew, 26, was third with 112 points.
Aubameyang is the Bundesliga’s leading scorer so far this season, with 18 goals in 17 league games.
Toure, who had won the award in each of the previous four years, led his country to the Africa Cup of Nations title in February.
He was recently voted BBC African Footballer of the Year 2015.
Herve Renard, who managed Ivory Coast to their Africa Cup of Nations victory, won the coach of the year award.
The Frenchman, who led Zambia to victory in the tournament in 2012, is the first person to coach two different countries to the title.Advertisement