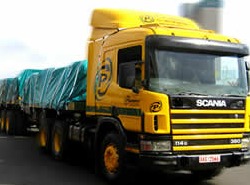 TRANSPORT operator, Pioneer Corporation Africa has said group revenues could double once the country’s empowerment ministry authorise a multi-million dollar transaction to incorporate Unifreight Swift into the group.
Under the proposed deal, Pioneer would pay US$7,2 million for the acquisition of fellow industry player Unifreight Swift in a mega-deal that is expected to restore its leading position in the logistics business.
The Competition and Tariff Commission has since approved the deal but the indigenisation ministry is yet to give its nod.
Once approved, Unifreight would own about 36,7 percent of the enlarged Zimbabwe Stock Exchange listed Pioneer Corporation Africa Group.
Pioneer said it is pinning its hopes on newly acquired fellow industry player Unifreight Limited to help double revenue.
Group chairman Patrick Chingoka said revenues decline by 9 percent to US$12,6 million in the six months to June 2013.
The purchase of Unifreight is yet to obtain regulatory approvals in line with provisions of the country’s indigenisation and economic empowerment laws.
“We are confident that once approval is granted Pioneer Corporation Africa will not only double its revenue but … fully utilise synergies that exist and provide a more complete transport and logistics solution to the market,” Chingoka said.
Chief executive Albert Ushe said the company was hoping to get a response following the appointment of a new Cabinet three weeks ago.
President Mugabe named a 26-member Cabinet after he defeated main opposition MDC-T leader Morgan Tsvangirai while his Zanu PF party garnered a more than two thirds parliamentary majority.
Former Environment Minister Francis Nhema was appointed Minister of Youth Development, Indigenisation and Empowerment, taking over from Minister Saviour Kasukuwere, who has taken over the rebranded Environment portfolio.
Pioneer acquired Unifreight in a US$7,2 million deal seeking to reposition and establish itself as the country’s leading transport and logistics business.
Once all the regulatory approvals are obtained Pioneer is expected to issue a total of 514 974 875 shares for the purchase consideration of US$4 million.
Pioneer will also take up US$900,000 Unifreight debt, pay US$1,5 million for the Swift brand over five years and an additional US$711,000 for Unfreight’s IT system over three years.Advertisement