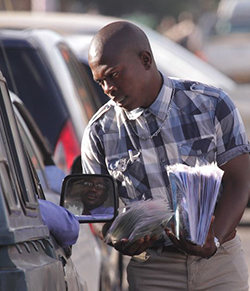 WHEN the country’s censors blacked out scenes from the film adaptation of the bestselling erotic novel, “Fifty Shades of Grey,” many Zimbabwean movie lovers couldn’t care less. They soon had another option, which was more explicit and cheaper.
The country’s continued economic difficulties have led to such a successful black market of pirated DVDs that many cinemas have been forced to close.
Many Zimbabweans now prefer the small screen in their living rooms, watching pirated copies of new film releases to save money, and in turn bringing the curtain down on the big screen experience.
Before the Zimbabwean dollar collapsed under record 231 million percent inflation in 2008, cinemas were common in cities and towns.
Even in the poorest neighbourhoods, local councils ran cinemas that were a hit with children and adults. Today, only five movie theatres remain in the country of 13 million people.
“A movie costs a dollar. Going to the movie houses costs $6 per person. You can do the math and you see why I stay at home,” said 26-year-old Samantha Baranza, a clerk at a Harare automotive spare parts distributor.
Traders swarm Harare’s streets, openly displaying a variety of pirated movie titles on the capital’s sidewalks. Dozens of hawkers mill around shopping malls trying to sell pirated movies and music.
Despite public campaigns against piracy and pledges by police to stamp out piracy, street trader Quinton Rushushe openly carries a bunch of DVDs in his hands.

Dozens more discs are in his satchel as he jostles for customers with hordes of other traders trying to sell copies to motorists and shoppers at Fife Avenue Shopping Centre, just a few streets from the police headquarters.
“Police officers can’t afford to go to the movies so they are our loyal customers. Some of them give me their phone numbers and I always call them when a new exciting movie is out so they can buy while it’s still hot,” he said.
Selling pirated discs is the only job Rushushe has known since leaving school in 2012. He said he gets his wares for 30 cents a copy from a friend “who has a computer.” On a good day he sells up to 15 copies at a dollar each.Advertisement

Police spokesman Paul Nyathi said: “We have arrested dozens but the challenge is that piracy is closely associated with vendors who are mushrooming everywhere, so it’s not an easy battle.”
Harsh economic conditions
With the closure of many companies, over two thirds of adult Zimbabweans have resorted to informal trading, according to the African Development Bank.
First Lady Grace Mugabe has warned police against targeting vendors, who she says are simply trying to beat harsh economic conditions.
Struggling to survive, the remaining movie distributors are experimenting with new marketing strategies, such as giving away free movie tickets at pizza houses, slashing prices by half on certain days and advertising in neighbourhoods via megaphone.
“Business has been going down. Our major competition is coming from home entertainment, which is what most people are resorting to nowadays because of the cheap DVDs flooding the streets,” said Tawanda Pswarayi, controller at movie distributor Ster-Kinekor, which has the only remaining cinema houses in the country. At times, only 10 people arrive to watch a show in a 200-seater auditorium, he said.
Zimbabwe’s strict censorship has made the cinema even less entertaining. In February, only two of the three cinemas left showed “Fifty Shades of Grey,” but heavy censorship cut out so many sexually explicit scenes that movie distributors decided to stop showing the tame edit after only a few screenings.
A little more than a week after its release, pirated copies of the film hit the streets, selling for as low as 50 cents a copy and bypassing censorship.
In buildings where movie theatres once existed in Zimbabwe, evangelical churches are now frequently flourishing. Daily services are packed.