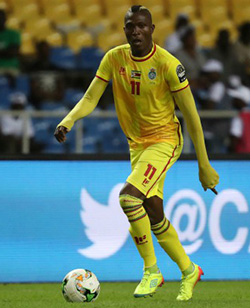 ORLANDO Pirates striker Tendai Ndoro has outlined Zimbabwe’s objectives ahead of the 2019 Africa Cup of Nations (Afcon) qualifying campaign.
The 29-year-old frontman is part of the Warriors team that will take on Liberia in ftheir first Group G encounter on Sunday.
Democratic Republic of Congo (DRC) and Congo-Brazzaville are also in Group G, and the two sides will lock horns in Kinshasa on Saturday.
“Well, we shall do our best during the qualifying campaign because our main objective is to reach the finals again,” Ndoro told Goal.
“Look, we want to win all of our first round matches in our group in order to put ourselves in a good position in race for a place in the finals,” he said.
Ndoro and his Warriors teammates disappointingly bowed out of the 2017 Afcon finals in Gabon after finishing at the bottom of Group B with one point.
“After qualifying, the main target would be to progress into the knockout stages after failing to advance from our group in Gabon,” Ndoro revealed.
“I believe that we can go as far as the semi-finals. We do have the talent to achieve this, but we need to work hard as team in order to meet our targets,” he concluded.
Ndoro is one of the four strikers called up by Zimbabwe caretaker coach Norman Mapeza and the Warriors will host Liberia at the National Sports Stadium in Harare.Advertisement