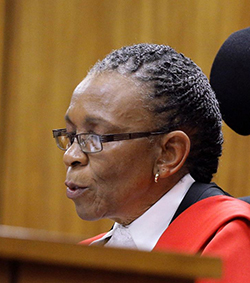 SOUTH Africa’s toughest police unit are protecting Pretoria judge Thokozile Masipa because she has been the target of a slew of threats and abusive messages since clearing Oscar Pistorius of murder.
The fabled South African Tactical Response Team accompany the 66-year-old female judge whenever she leaves her home in Pretoria.
The special patrol group, known locally as “amaBerete” (men in berets), is infamous in the country for its heavy-handed approach to policing.
Judge Masipa has reportedly been bombarded by threats since she controversially cleared Pistorius of murdering his girlfriend Reeva Steenkamp.
Although she convicted Pistorius of culpable homicide, many South Africans felt the 27-year-old runner had received a lenient punishment.
Legal groups have condemned the hatred being aimed of Judge Masipa as a result.
A spokesman for an organisation called SECTION27 said: “Attacking the judge’s integrity and making insinuations of bribery or that she’s not fit because she’s a woman, or that she’s black, means that you’re breaking down the belief in the law.”
The state may decide to appeal Pistorius’ not guilty verdict, amid claims there were errors of law made by judge Masipa.Advertisement