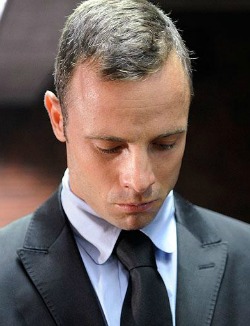 THE South African athlete Oscar Pistorius is to seek an appeal against his conviction for murdering his girlfriend, Reeva Steenkamp.
Pistorius killed Ms Steenkamp in February 2013 after firing four times through a locked toilet door.
A manslaughter verdict was overturned last month and a murder verdict introduced in its place.
The athlete’s defence has lodged papers at the Constitutional Court, urging a review of his murder conviction.
He is currently under house arrest after spending one year of his original five-year sentence in jail.
South Africa’s Supreme Court of Appeal ruled in December that the lower court had not applied correctly the rule of dolus eventualis – whether Pistorius knew that a death would be a likely result of his actions.
Last month, Justice Eric Leach said that having armed himself with a high-calibre weapon, Pistorius must have foreseen that whoever was behind the door might die, especially given his firearms training.
Pistorius has always maintained he believed he was shooting at an intruder.
His lawyers say the appeals court made fundamental errors, claiming in appeal papers that the court “acted unlawfully and unconstitutionally when it rejected the factual finding of the Trial Court and replaced it with a contrary factual finding of its own”.
Pistorius’s lawyer, Andrew Fawcett, says the appeal is now in the hands of the director of public prosecutions, who must decide whether there are grounds for appeal. If so, the case will go before the Constitutional Court.
The South African made history by becoming the first amputee sprinter to compete at the Olympics, in London in 2012. He competed in the 400m, wearing carbon-fibre blades to run against able-bodied athletes.Advertisement