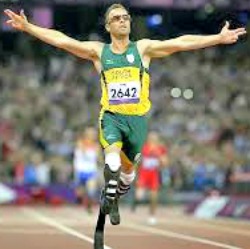 SOUTH African Olympic and Paralympic track star Oscar Pistorius on Friday broke his months-long silence about the shooting of his girlfriend Reeva Steenkamp, calling her death at his hands a year ago a “devastating accident”.
Pistorius talks of sorrow a year after Steenkamp shooting, who goes on trial on March 3, says he shot Steenkamp after mistaking her for an intruder at his high-security home last Valentine’s Day. State lawyers say he killed her in cold blood.
“No words can adequately capture my feelings about the devastating accident that has caused such heartache for everyone who truly loved, and continues to love, Reeva,” Pistorius said in a brief statement posted on his website.
“The loss of Reeva and the complete trauma of that day, I will carry with me for the rest of my life,” said the athlete, who is on bail but could face life in prison if convicted.
The 27-year-old double-amputee, known as “Blade Runner” for the prostheses he wears in competition, was one of South Africa’s most revered sportsmen but his shooting of Steenkamp has divided national opinion on whether it was premeditated.