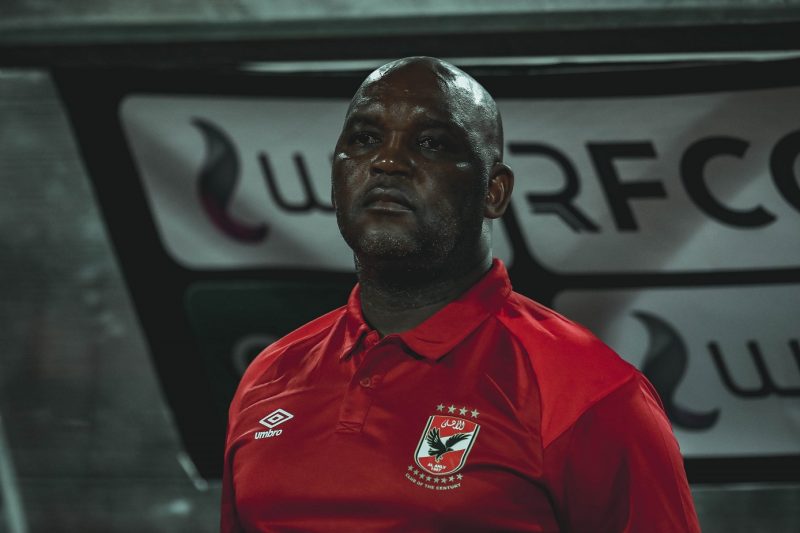 Pitso Mosimane has left Egyptian giants Al Ahly after the serial Caf Champions League winner and the club reached an agreement on Monday to go their separate ways.

Al Ahly have confirmed the departure on their official website. It is also understood Mosimane is leaving the club with his trusted lieutenants in fitness guru Kabelo Rangoaga and performance analysts Musi Matlaba and Kyle Solomon.

“Mahmoud El Khatib, the club’s president, held a meeting with Yassin Mainsour, the chair of Al Ahly Football Company; Hossam Ghaly, the club’s board member and the planning committee members, to discuss Mosimane’s future with the club.

“They decided he should continue his mission with Al Ahly as a result of the achievements he has managed.

“However during the meeting that was previously held Mosimane requested to leave and [said] that he is satisfied with the achievements he accomplished at the club.

“Mosimane’s decision was discussed and it was decided to approve his request to part ways with the club, and to thank him for his achievements with Ahly.”

This stunning turn of events follows a high-level meeting in Cairo on Monday afternoon where Mosimane, Rangoaga, Matlaba and Solomon were represented by their manager, Moira Tlhagale of MT Sports Marketing and Management.

Tlhagale arrived in Egypt on Saturday for a showdown meeting that day, which led to a further meeting on Monday. She was not immediately available for comment.

A well-placed source also confirmed the parting of ways to TimesLIVE, and said there were too many issues between the coach the club for the relationship to continue.

“It is done, the coach is definitely leaving the club. There were too many things happening behind the scenes over the past few weeks that led to this situation,” said a source close to the club who did not want to be named.

The source also indicated Mosimane may have been at the end of his tether at the constant criticism he receives from sections of the Egyptian media, fans and former players.

On Tuesday Mosimane — then in Morocco for a coaching course — attended a virtual meeting to discuss matters relating to the club with Ahly’s board and president Mahmoud El Khatib and they scheduled another one for Saturday night.

Mosimane returned to Egypt on Saturday.  In the further meeting in Cairo on Saturday, there was no finality on many burning issues on the table and another meeting was set for Monday afternoon where both parties finally agreed to part ways.

Early last week, Tlhagale expressed her disappointment at criticism that has been consistently levelled at Mosimane by some Ahly legends, sections of the media and some pundits despite the trophy success that he has brought the club.

It is believed that one of the sticking points in the meeting was the club wanting to bring in a new fitness trainer to work closely with Rangoaga, who is highly trusted by Mosimane.

Mosimane was not on the bench as an understrength Ahly — missing players on international duty with Egypt — beat Al Masry Salloum 1-0 in the Egyptian Cup at home at Al-Salam Stadium on Saturday.

Mosimane has won five trophies since his bombshell move from Mamelodi Sundowns to Ahly in September 2020, including back-to-back Caf Champions League titles in 2019-20 and 2020-21.

Ahly missed out on a record-breaking third title in succession losing 2-0 to Wydad Athletic in the 2021-22 final, which was controversially played at the home venue of the Moroccan club in Casablanca.

Before Mosimane’s arrival Ahly had not won the Champions League, the trophy the club covets most, in seven years.

The coach also won the Egyptian Cup and the Caf Super Cup twice at Ahly.

His one Egyptian Premier League title came in the Covid-19-extended 2019-20 season, but that had already been wrapped up by Swiss predecessor Rene Weiler when the South African arrived at Ahly.

Ahly’s battles under Mosimane to win the Egyptian league — finishing runners-up to bitter Cairo rivals Zamalek in 2020-21 and in placed third, though with games in hand, in the current campaign — are part of the reason the coach has faced criticism.

However Ahly’s international exploits, including equalling their best finish of third position at the Fifa Club World Cup twice in succession despite scheduling disadvantages, have seen them face a punishing schedule of matches, which has affected league form.