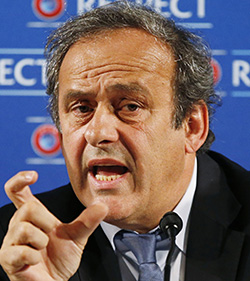 BANNED European soccer boss president Michel Platini has withdrawn his candidacy from the race for the presidency of soccer’s scandal-plagued governing body Fifa, he told French sports daily L’Equipe on Thursday.
Platini, the head of European soccer body Uefa, was handed an eight-year ban from the game by along with outgoing Fifa president Sepp Blatter by the federation’s independent Ethics Committee on December 21.
The former French international has insisted he has done nothing wrong and was still hoping to win an appeal in time to have been allowed back in time for the election on February 26., but said he had changed his mind.
“I withdraw my candidacy. I can no longer (go through with it). I have neither the time, nor the means to go and see the voters, to meet people, and to fight with others,” he said in an interview which L’Equipe published on its website.
“By withdrawing, I chose to fully focus on my defence on a case where there’s no talk of corruption, falsification anymore, in which there’s nothing left,” added Platini, who was widely seen as the favourite until he was banned.
“It’s a matter of schedule, but it’s not just that. How do you win an election when you’re prevented from campaigning?”
Blatter and Platini were both banned over a payment of 2 million Swiss francs ($2 million) made to the Frenchman by Fifa with Blatter’s approval in 2011 for work done a decade earlier.
The committee said the payment, made at a time when Blatter was seeking re-election, lacked transparency and presented conflicts of interest, though both men denied wrongdoing.Advertisement